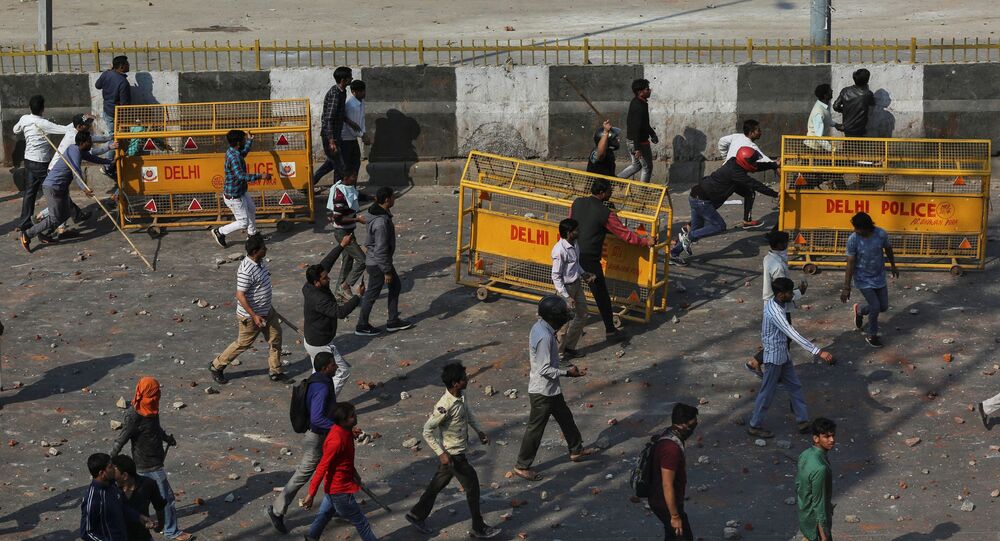 New Delhi (Sputnik): On Sunday, clashes broke out in several parts of the national capital where pro and anti Citizenship law (CAA) protesters hurled stones at each other. Police fired tear gas to disperse the protesters.

A policeman died on Monday after being hit during a stone-throwing demonstration over the new citizenship law in New Delhi.

The incident occurred as clashes between pro and anti Citizenship law campaigners erupted for the second consecutive day in Delhi's Jaffarabad district, with both sides exchanging stones and bricks.

Police sources revealed that the officer was hit on the head with a stone.

​Protesters are torching vehicles and shops leading to chaos in this northeastern part of the city. Police had to use tear gas to disperse the groups. However, the situation is not yet under control, a senior police official told Sputnik.

“Our group is trying their best to control the agitators. However, the cops are stuck in the middle of both the groups who resort to stone pelting in intervals. Heavy security has been deployed in the area,” a senior police official in Jaffarabad said.

The protesters on Monday damaged a lot of property including setting police vehicles on fire in separate parts of the city and even burnt down a petrol station, police said.

​During the protest in Jaffarabad area, a protester was seen pointing a gun at police and also fired several shots.

VIDEO: A protester opens fire in Delhi’s Jaffarabad area. He pointed pistol at policeman but the cop stood firm pic.twitter.com/WvClU1RMxB

​Delhi’s state chief took to Twitter and said: “Very distressing news regarding disturbance of peace and harmony in parts of Delhi coming in. I sincerely urge Hon’ble LG (Lieutenant Governor) n Hon'ble Union Home Minister to restore law and order n ensure that peace and harmony is maintained. Nobody should be allowed to orchestrate flagrations.”

Very distressing news regarding disturbance of peace and harmony in parts of Delhi coming in.
I sincerely urge Hon’ble LG n Hon'ble Union Home Minister to restore law and order n ensure that peace and harmony is maintained. Nobody should be allowed to orchestrate flagrations.

The Delhi Police has imposed Section 144 CrPC (to prohibit assembly of five or more persons when unrest is anticipated) on 10 locations in north-east Delhi.

The officials of the Delhi Metro closed entry and exit at Jaffrabad and Maujpur-Babarpur metro stations in view of the situation.

Entry & exit of Jaffrabad and Maujpur-Babarpur are closed. Trains will not be halting at these stations.

The situation In Jaffarabad worsened on Sunday after about 1,000 people blocked an arterial road to stage a sit-in protest, inspired by the ongoing Shaheen Bagh protest, amid a heavy police deployment. Chaos erupted when supporters of the Citizenship Law arrived and the groups pelted each other with rocks.

Joint Commissioner of Police (Eastern Range) Alok Kumar said on Monday that four cases have been registered in connection with the protests on Sunday.

The Citizenship Amendment Act of 2019, which was enacted by the Indian federal government in December after approval from both house of the parliament, seeks to grant citizenship rights to illegal immigrants from “persecuted minorities” from three neighbouring Islamic countries – Afghanistan, Bangladesh, and Pakistan.

But since Muslim immigrants were excluded by the law, it has angered several opposition parties, civil rights groups and university students in India. They claim that it discriminates on religious grounds and violates India's constitution.