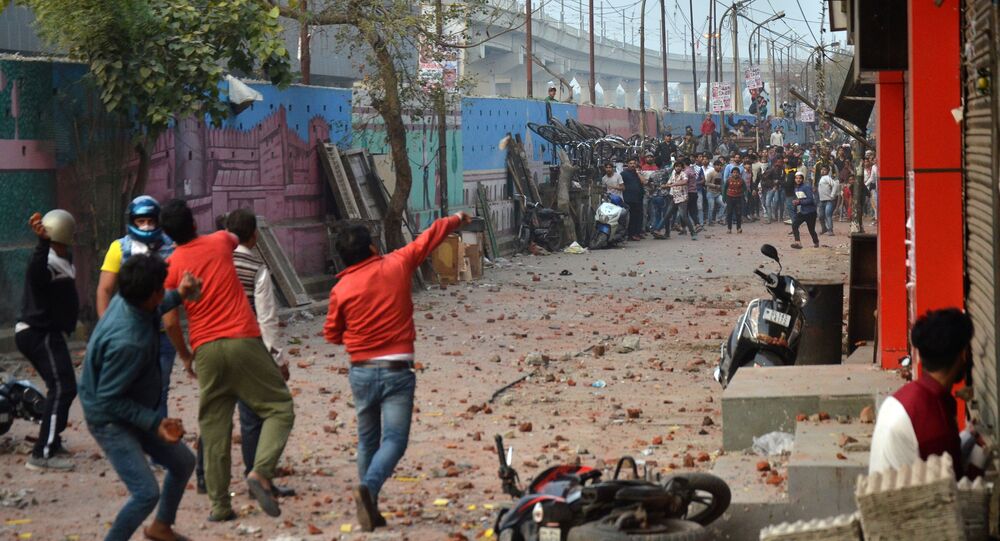 New Delhi (Sputnik): A nationwide strike was called by the Bhim Army, a Dalit ('untouchables') organisation working for the rights of scheduled castes and tribes on Sunday – a day ahead of US President Donald Trump and first lady Melania Trump’s visit in the country.

Tension gripped various parts of India, with segments of the capital Delhi becoming the epicentre of clashes on 23 February after protest organisers called for demonstrations against the nation's contentious new Citizenship Law.

At least nine vehicles and an eatery were torched by hooligans in Delhi’s Karawal Nagar area in the late hours of Sunday. The mob pelted the police with stones as they attempted to control the situation, and stopped the flow of traffic, eventually setting vehicles alight.

Police used tear gas shells and resorted to baton-charges to control the situation, but the rampage continued as the mob threw stones at the windows of residential buildings and police. Pro- and anti-citizenship law protesters are now blaming each other for the riots.

Police has covered Protest Site of #Jaffarabad Metro Station from all Sides. Stones and Broken Bricks have been brought at Maujpur, in two tractor trollies which is just 500 metres away from Protest Site.
Any untoward incident can happen.

In Delhi’s Hauz Rani neighbourhood, near Malviya Nagar metro station, protesters attempted to block the arterial road providing access to Max hospital. A scuffle broke out between police and protesters after the police tried to remove the protesters from the main road, where traffic had ground to a halt. Several were injured and later rushed to Pandit Madan Mohan Malviya Hospital.

In videos that have emerged on social media, the victims are alleging police brutality and insisting the protests were peaceful.

In Video : A elderly women got beaten up with lathis by Dalli Police at Hauz Rani #Jafrabad Welcome To INDIA https://t.co/cnvXB2vvw5 pic.twitter.com/x5lr0nrcPp

In northeast Delhi’s Jaffrabad neighbourhood, the situation worsened after 1,000 people blocked an arterial road to stage a sit-in protest, inspired by Shaheen Bagh, amid heavy police deployment. Chaos erupted when supporters of the Citizenship Law arrived and the groups pelted each other with rocks.

Following the clashes, entry and exits gates of the Jaffrabad, as well as Maujpur-Babarpur metro stations, have been closed due to intensified anti and pro-CAA group clashes.

In Aligarh in Uttar Pradesh, India's largest state, incidents of vandalism, arson and stone-pelting were reported on Sunday afternoon, a few hours away from Agra city where Donald Trump is set to visit on Monday. The police had to fire tear gas shells to disperse the crowd, which had turned to vandalism. Several police vehicles and a shop were torched. Clashes erupted after police tried to remove a women protesting on Mohamed Ali Road, which leads to the Kotwali police station, since Saturday.

After Lathi Charged by @Uppolice on women protesters of UPPAR COURT, ALIGARH

​​The controversial Citizenship Law Act grants Indian citizenship to non-Muslim immigrants from Pakistan, Afghanistan and Bangladesh who entered India before 2015. Protesters allege the law is discriminatory on religious grounds and violates the secular nature of the Indian Constitution - something the government strongly denies.