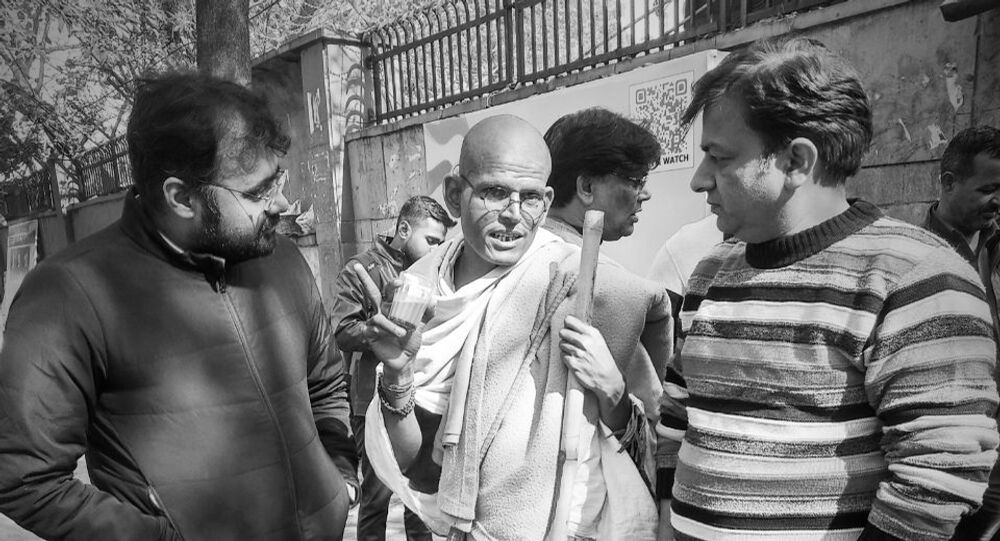 New Delhi (Sputnik): The humble attire of Mahatma Gandhi comprised of a loincloth, a shawl made of the traditional Indian fabric Khadi, a walking stick, and a watch hanging to the waist has become iconic. India’s poverty was behind his choice of garments: he wanted to identify with the lowest strata of society, the Harijans, now known as Dalits.

Decades after Indian freedom struggle icon and Father of the Nation Mahatma Gandhi was assassinated in 1947, a man clad in a loincloth (Dhoti) like Gandhi is leaving many locals in Delhi overwhelmed.

He has travelled about 700 km to be in the national capital city with a message for the Indian prime minister and political parties.

Santosh Lodhi, who has travelled all the way from Madhya Pradesh to New Delhi, says that Prime Minister Narendra Modi should primarily focus on ensuring maximum employment opportunities for the jobless youth of India.

Having worked as a security guard earlier, Lodhi became deeply inspired by Gandhi’s simplicity in life, but strong determination to voice one’s opinion. Thus, he started dressing up as Mahatma Gandhi about 18 years ago. His appearance attracts attention, as it looks as if Gandhi has come alive.

Aged about 40, Lodhi shifted from his native place of Sagar in Madhya Pradesh to Pune in the Indian state of Maharashtra about two decades ago to work as a security guard in a housing society. A school dropout, he says that even Gandhian social activist Anna Hazare inspires him a lot.

Ever since becoming jobless, Lodhi has donned Gandhian attire. Sporting round Gandhian glasses, wearing his white loincloth, and carrying a long walking stick, he is trying to make his life meaningful by raising issues concerning his native place.

Sipping a glass of tea during a stop at a roadside kiosk in Delhi, Lodhi told Sputnik: “I often come to Delhi as this city is microcosm of India’s politics. I have cycled to Delhi from my native place Sagar twice to give representation to Railway Minister Piyush Goyal, demanding implementation of the railway line between Sagar and Karali, which was approved long years ago”.

He opines that since a lot of educated people are not getting jobs, “PM Modi should ensure that the unemployed youth of India should get government jobs in large numbers as there is a lot of exploitation in the private sector”.