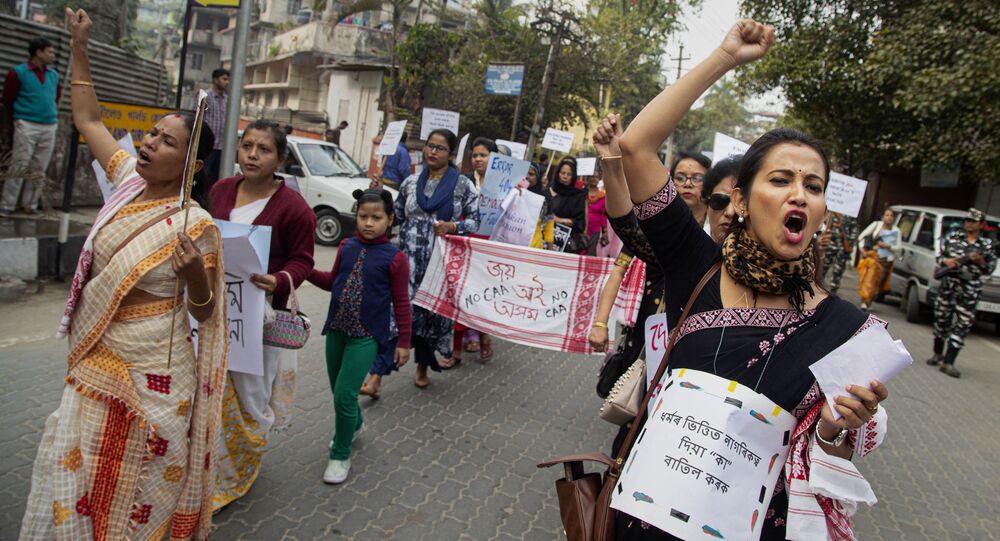 New Delhi (Sputnik):  For 35 days hundreds of women, the majority of them from the Delhi Muslim community, are out on streets braving biting cold and occasional rains to mark their protest against the Citizenship Amendment Act (CAA), which they claim is discriminatory against Muslims and violates the Constitution of the country.

A non-violent demonstration led by women in southeast Delhi’s Shaheen Bagh area since 15 December 2019 against the controversial citizenship law has become the epitome of anti-CAA protests across the country.

While a petition seeking an end to the protests was filed in the High Court of Delhi against the blockade, the Delhi court on 14 January refrained from intervening in the matter, asking Delhi Police to act as they deemed fit, while keeping in mind the more considerable public interest, and the maintenance of law and order in the area.

It has inspired similar demonstrations in various states including Uttar Pradesh, West Bengal and Bihar.

Inspired by women spearheading the protests in Delhi against the citizenship law, women in the city of Lucknow in the northern Indian state of Uttar Pradesh have engaged in a similar sit-in since 17 January. Hundreds of women refuse to budge from their protest site until the government rolls back the law.

​The northern state of Uttar Pradesh witnessed large scale clashes between the anti-CAA protestors and the state police, leading to nearly 1,110 police complaints and 19 deaths.

Women in a predominantly Muslim area of Kolkata, the capital of India’s eastern state of West Bengal have been protesting against the citizenship law since 7 January.  Women and children with placards have been out on the streets near a local mosque in the city, raising slogans demanding “Azadi” (Freedom) from the law at any cost. The protest which started with nearly 60 women has now swelled and is attracting hundreds of women.

​Chief of West Bengal State Mamata Banerjee had actively carried out protest marches against the CAA. She had announced, the state government would not implement the federal law and asked Prime Minister Narendra Modi to “rethink these steps”.

Delhi’s Shaheen Bagh protest was replicated at the Sabzibagh locality in the city of Patna, the capital of the Indian State of Bihar. People of all age groups have joined the protest that began on 12 January. Women protesters have vowed: “Hum Kagaz Nahi Dikhaenge” (we won’t show the documents) to prove their citizenship.

​Bihar also saw widespread violent protests against the controversial law which resulted in a crossfire between state police and protestors. Nearly, 11 people including 2 policemen were injured.

The country has witnessed widespread protests against the CAA, which grants Indian citizenship to non-Muslim immigrants who fled persecution in Afghanistan, Pakistan and Bangladesh and settled in Indian before December 2014.

The bill has been targeted by opposition parties and civil rights activists for its conspicuous exclusion of Muslims and violation of secularist ideals of the Constitution since it grants citizenship on the basis of religion.

Prime Minister Modi, however, had clarified that no Indian Muslim has anything to worry about regarding the law “as it seeks to grant citizenship, not snatch it”.