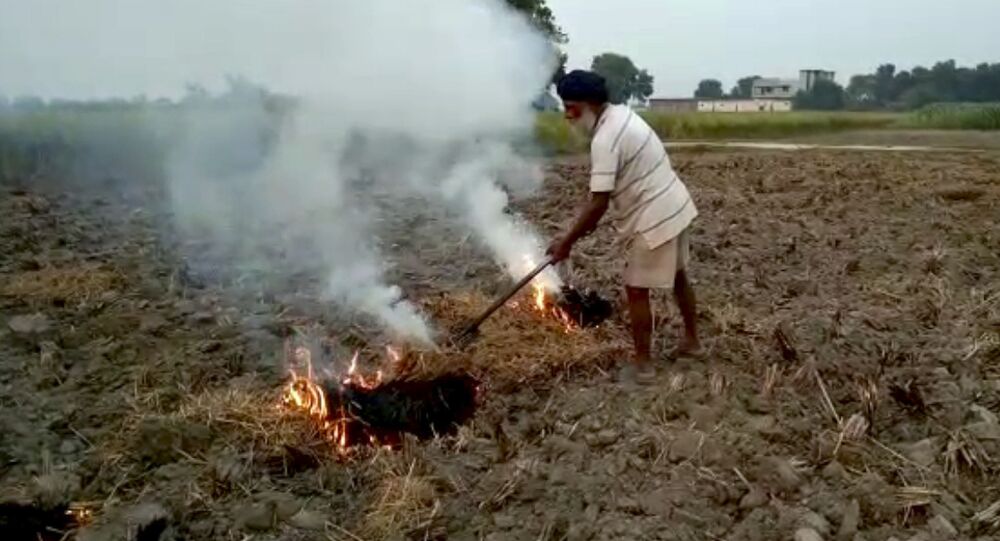 New Delhi (Sputnik): Indian farmers, especially in the northern states of Punjab, Haryana, and Uttar Pradesh burn crop residue, known as stubble, to prepare the field for the next crop. Stubble burning has been cited as one of the key causes of the alarming rise in air pollution in the national capital Delhi, and neighbouring states.

UP government in a statement on Tuesday has claimed, at least 167 farmers were arrested and 104 officers and employees suspended for violating the ban on burning stubble.

The statement also said that a total of 4230 incidents of stubble burning were reported in 2019 in Uttar Pradesh, whereas the number was much higher in 2018 with 6623 cases.

After India’s Supreme Court ordered a ban on stubble burning and strict action against violators, northern Uttar Pradesh (UP) government had claimed incidents of stubble burning in the state has been reduced by approximately 36 per cent year on year in 2019.

Last November and December, Delhi along with several other states faced critical levels of air pollution. The increased incidents of stubble burning in the adjoining states of Haryana, Punjab and Uttar Pradesh and a drop in temperatures were claimed to be the major culprits in causing the air pollution. During the beginning of winter season, a thick blanket of smog enveloped Delhi with the Air Quality Index blowing up to ‘severe’ levels.

After the Supreme Court had asked the federal government to come up with alternatives to stubble burning, it set up an expert group to suggest a long-term, permanent solution.