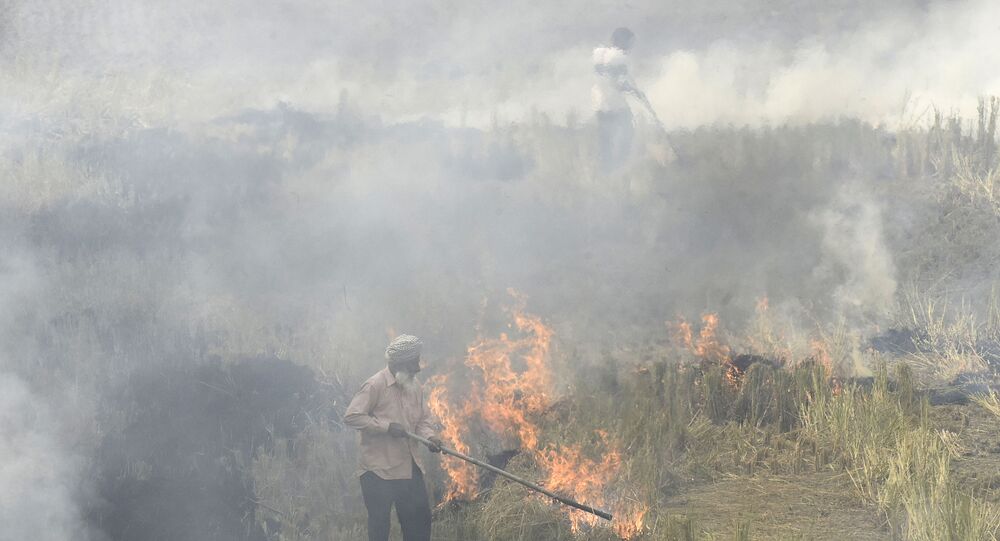 New Delhi (Sputnik): With the air quality in India’s capital nose-diving in November this year, the country's top court slammed both the federal and provincial governments for playing with the lives of people, commenting that Delhi has become “worse than hell”.

Stubble burning in the neighbouring states surrounding Delhi during crop cultivation during this year was cited as one of the major reasons for air pollution in the Indian capital.

The federal government has now set up two pilot plants to use paddy straw to produce green coal, which would be used to generate power. Federal Secretary for Housing and Urban Affairs Durga Shankar Mishra took to Twitter to announce the setting up of the plants in the northern state of Punjab, a farming-oriented state in India.

“In a first of its kind initiative to reduce air pollution of PM 2.5 & 10 in Delhi & the National Capital Region, generated by stubble burning in the nearby areas, two paddy Waste-2-Energy Plants have been set up in Firozpur & Faridkot", said Mishra.

In a first of its kind initiative to reduce air pollution of PM 2.5 & 10 in Delhi & the National Capital Region, generated by stubble burning in the nearby areas, two paddy Waste-2-Energy Plants have been set up in Firozpur & Faridkot. pic.twitter.com/7YyWtMUL87

​Mishra said the plants, with Swedish technology, would utilise about 0.6 million tonnes of paddy straw to generate 36 mega watts of power. He said the plant was currently working at 40 percent capacity and in another fortnight would become fully operational.

India’s state-funded National Agri-Food Biotechnology Institute in northern Mohali had signed a pact with Bioendev AB, Sweden to set up the pilot project to produce green coal or energy pellets, which can be used as fuel.

The plant would use a process known as torrefaction – a thermal process to convert biomass into green coal, which leaves no carbon footprint.