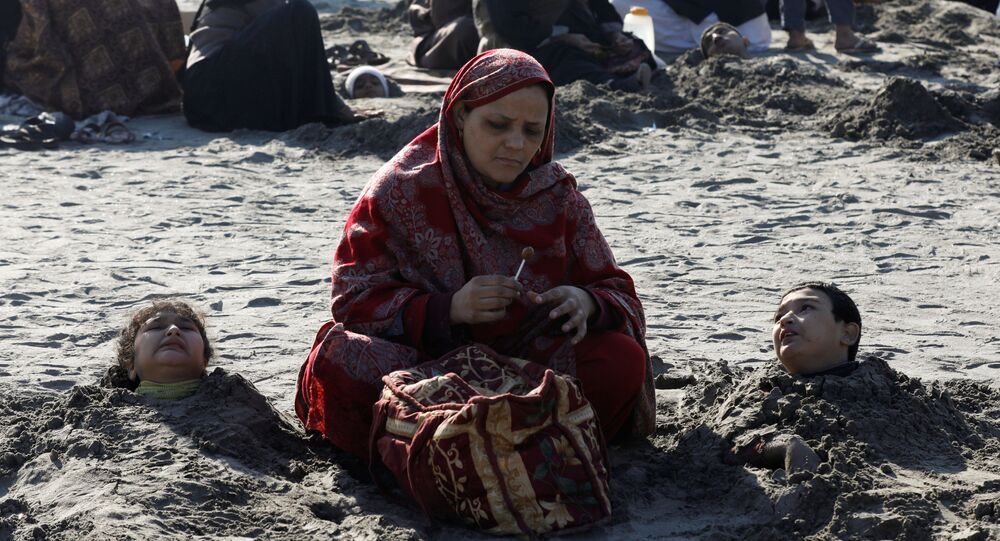 New Delhi (Sputnik): As people in various parts of the world witnessed the biggest of celestial events, a solar eclipse – the last one of the decade, superstitious beliefs connected with it also spurt up among traditional Indians.

In the southern state of Karnataka, children with mental and physical disabilities were buried neck-deep in the ground in the Kalburgi area on Thursday. Three children were reportedly buried for hours in the ground by the parents in the hope to cure their disabilities.

According to local media reports, the ritual took place at various places and around four more children were buried neck-deep in the ground in Ainolli village of the state's Gulbarga district.

Soon after activists in the area alerted the police, the children were rescued and taken to a nearby hospital.

Disabled #children were buried neck-deep during #SolarEclipse in #Karnataka’s Tumkur and Kalburgi districts. The belief is that their disability will be cured. They were buried for close to 3 hours. pic.twitter.com/SInjt7tigV

Karnataka: Three specially-abled children were buried up till the neck at Tajsultanpur village in Kalaburagi, during #SolarEclipse, earlier today as parents believed that their children will be cured of deformities by this. pic.twitter.com/8JncLKk4Xl

The police filed cases against the parents, while the administration has decided to take up awareness drives to combat such practices.

An anti-Superstition protest was held in Karnataka on Thursday by a group of activists against superstitious beliefs surrounding the solar eclipse. People sat in protest with food and water, countering the belief that people ought to refrain from eating and drinking during an eclipse.

Other superstitions that surround the celestial happening are that an eclipse can have an adverse effect on the health of pregnant mothers and newly born children; pregnant mothers should refrain from doing any sort of cutting and chopping activity, as it can lead to birthmarks or other health issues for the baby.

Often referred to as a "Ring of Fire", the solar eclipse in India was partial in form, and visible in the states of Karnataka, Tamil Nadu, Kerala, Maharashtra, Gujarat, and Delhi.

The partial solar eclipse in the country began at 0759 Hrs Indian Standard Time (IST) and ended at approximately 1131 Hours IST.

Earlier this kind of solar eclipse was seen in 1990!