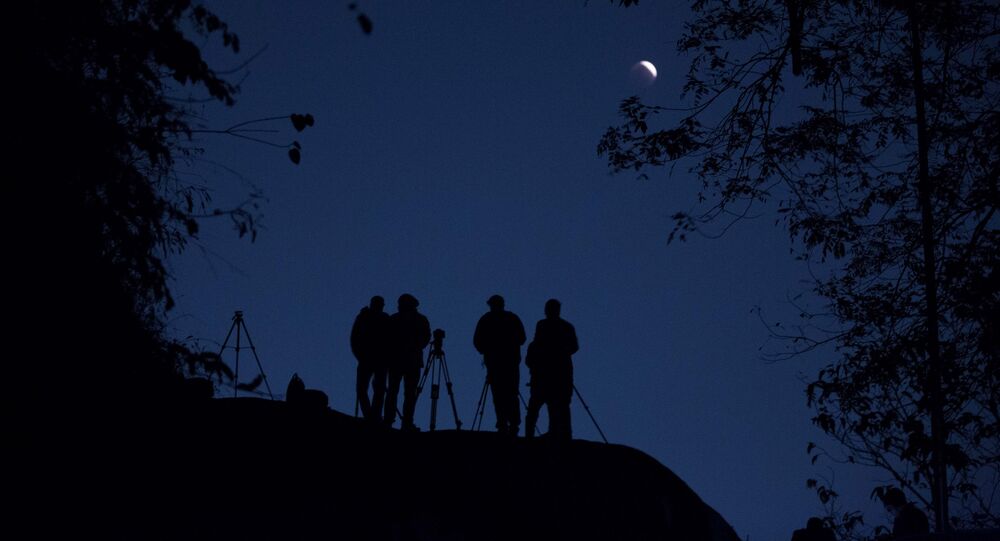 New Delhi (Sputnik): A solar eclipse occurs when the Moon passes between the Earth and the Sun, totally or partly obscuring the view of the Sun from Earth. In India, most temples and shrines will remain shut during the eclipse and will reopen after purification rituals.

The annular solar eclipse, the last one of the decade, is underway in India. There are three types of solar eclipse - total, partial and annular. Often referred to as a "Ring of Fire", the solar eclipse in India will be partial in form, and visible in the states of Karnataka, Tamil Nadu, Kerala, Maharashtra, Gujarat and Delhi.

The partial solar eclipse in the country began at 0759 Hrs Indian Standard Time (IST) and will end at approximately 1131 Hours IST.

Netizens took to social media to share their joy over witnessing the astronomical wonder that occurs at least twice a year in most places. On rare occasions, there can be up to seven eclipses in a year. Some revealed that they were watching a solar eclipse for the first time.

Install a windows software called Stellarium, set the location to the city where the eclipse is happening, and you can watch the eclipse on your computer screen. It looks 100% real - 🌞🌘

It's even more prominent in North Kerala

In Gujarat, Kerala and Tamil Nadu states, the partial eclipse was clearly seen in varying magnitudes, depending on its geographical position, the ANI news agency said.

Rare Solar eclipse after 20 years!
Earlier this kind of solar eclipse was seen in 1990!
#solareclipse2019 pic.twitter.com/SIyETZ7QRC

#solareclipse2019 is partially visible in Mumbai. Still time, go out and watch this magnificent beauty! pic.twitter.com/uTL2qQL9G1

#WATCH | The ‘Ring of Fire” or annulus around the Moon created by the #AnnularSolarEclipse.
🌞 This is the last solar eclipse of the decade.(AIR)#SolarEclipse2019 | #SolarEclipse | #SuryaGrahan | #RingOfFire
(Source: AIR|DD News HD)pic.twitter.com/627oJ9ohLi

Astronomers have issued do's and don'ts for safely viewing the eclipse because the infrared and ultraviolet rays of the Sun can damage the naked eye if viewed without the use of proper protective equipment. Viewers have been advised to view the eclipse through dark glasses, pinhole cameras and telescopes to prevent retinal damage.

The full eclipse will be visible from the Pacific Ocean Island of Guam at 1230 Hrs (IST).