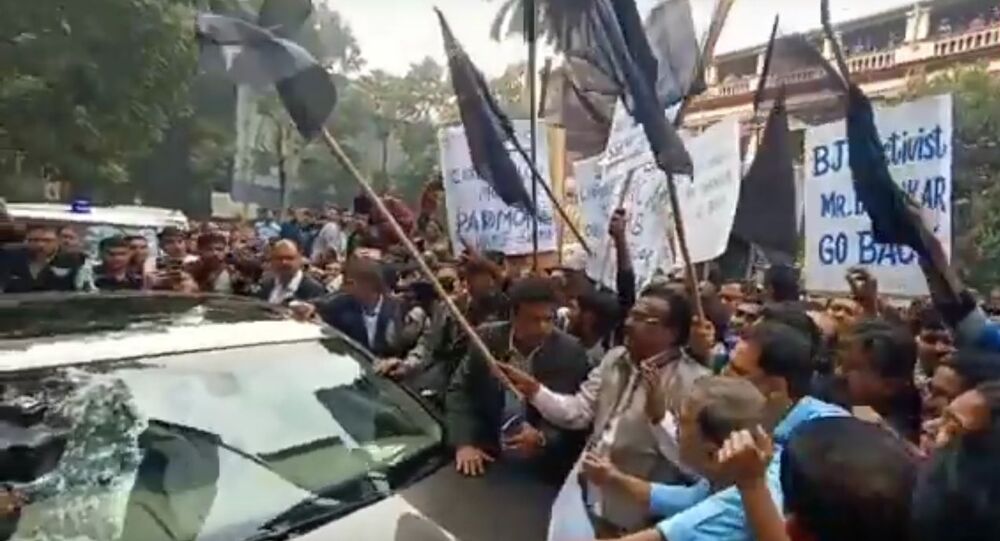 New Delhi (Sputnik): The protest was held a day after Governor Jagdeep Dhankhar, who is the chancellor of all universities in the state of West Bengal, declared “illegal and invalid” the university's decision to defer the 24 December special convocation because of possible trouble.

The head of India's state of West Bengal had to face students’ ire as he arrived to attend a graduation ceremony at Jadavpur University in the capital city of Kolkata.

Furious over West Bengal state Governor Jagdeep Dhankhar’s not coming in support of protesters against the Citizens Amendment Act (CAA), students showed him black flags just as his cavalcade arrived at the university.

Disappointed with the protestors’ act, the governor said state chief Mamata Banerjee should take responsibility for such a crisis.

“…Don’t play with fire; maintain rule of law. This is a worrisome and unwholesome situation. The government in the state is playing with the future of the students. This is a total collapse of administration”, Governor Dhankhar told media at the protest venue.

He further stated: “At Jadavpur University, a convocation was to be held so that students may get their degrees and enjoy the fruits of their labour and contribute to society. Unfortunately the way to the venue is blocked. No affirmative role by concerned in sight".

Both students and staff of the university took part in the demonstration and raised "Go back" slogans against the dignitary.

Dhankhar was even questioned by agitating students over his stance on the Citizenship (Amendment) Act which they insisted violates the Indian Constitution. They demanded to know why he was silent on the deaths of people across the country and a mute spectator to the vandalisation of the university campus by those supporting the Citizenship Act.

Maintaining that he was not a representative of the government but of the Indian Constitution, Dhankhar asked students to send him a memorandum, as he was concerned about their well-being and future. He also said that the autonomy of universities should be safeguarded from political influence.

Protests against the CAA have raged in cities and turned violent in parts of the country, resulting in vandalism, destruction, arson, as well as the death of over 20 people and injuries to hundreds of people over the last few days.

The new Citizenship Amendment Act grants citizenship to Hindus, Sikhs, Buddhists, Jains, Parsis, and Christians who fled religious persecution in Pakistan, Bangladesh, and Afghanistan and arrived on or before 31 December 2014.

The act came under fire for what the protesters described as a violation of the Indian Constitution by granting citizenship to six religious minorities and excluding Muslims.