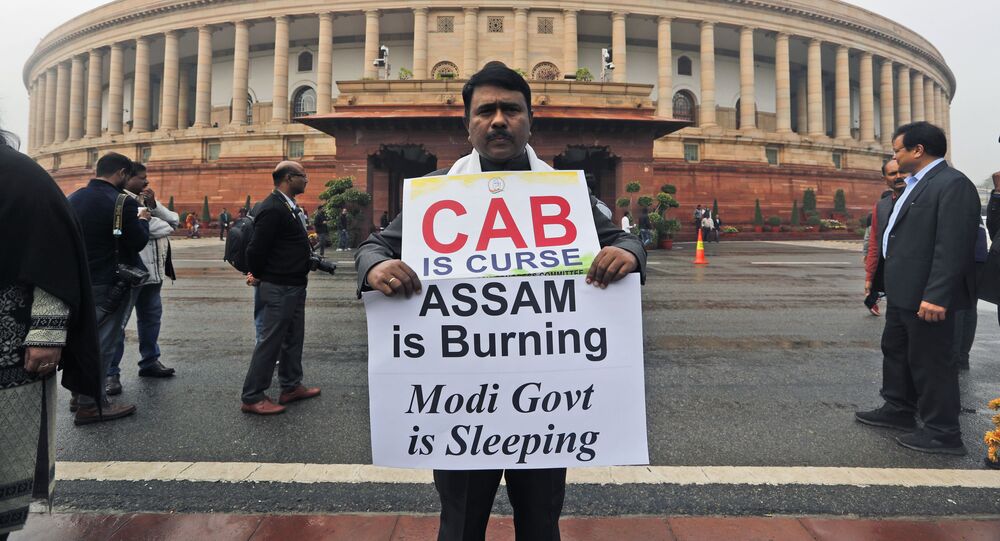 New Delhi (Sputnik): Protests over a new citizenship law in India have been raging across the country since its enactment. The law allows citizenship to be granted non-Muslim immigrants such as Hindus, Christians, Sikhs, Buddhists, Jains, and Parsis from Pakistan, Afghanistan, and Bangladesh, but Muslims aren't eligible.

While thousands of people, including students and famous personalities, took to the streets to show their disagreement with a new citizenship law, a simultaneous protest emerged in support of the act and started trending on Twitter as netizens feel that those who are protesting have a half baked knowledge about it.

Contrary to the half baked knowledge of celebs opposing #CAA, every single person who attended the #IndiaSupportsCAA March last night at Connaught Place, knew about the provisions of the act.

Journos who were searching for some loopholes or stories, were for a shock! pic.twitter.com/zEhMiIRaBo

Twitterati also suggest that Government should not differentiate between citizens on the basis of religion, necessitating the adoption of a Uniform Civil Code.

The govt should not differentiate between citizens on the basis of religion.

Some even raised questions on Bollywood personalities Like Farhan Akhtar and Swara Bhasker who joined the protesters against the law and blamed them for building “false narratives”.

Many social media users shared the videos of “Massive rallies” that were organised in support of the act.

MASSIVE Rally in Maharashtra in support of #CitizenshipAmendmentAct THIS is how a Rally is held peacefully in a Democracy 👏👏🇮🇳🇮🇳 Not the arson that we have been subjected to in name of "protests" #CAA_NRC_support #Support_CAA_and_NRC #IndiaLovesModi #IndiaAgainstViolence pic.twitter.com/Ut1P1ytUGT

One user also shared information on new law for those "misinformed" crowd.

Whatever The Person Does Not Know What Is The Citizens Amendment Law, Whether It Is From Any Community, It Is Very Important For All Of You To Know.@narendramodi @AmitShah #CAA_NRC_support pic.twitter.com/uLApB8YvVE

The new Act along with a proposed National Register of Citizens (NRC) have led to nationwide protests, especially by the Muslim community, who allege it is discriminatory. The NRC calls for the identification of all illegal immigrants living in India, but some Muslims are concerned that when the NRC is launched across India, only Muslims will have to prove their citizenship and not people of any other faith.

The Citizenship Law grants citizenship to illegal immigrants from six religious minorities – Hindus, Parsis, Jains, Christians, Buddhists, and Sikhs, from Afghanistan, Bangladesh, and Pakistan, if they arrived in India prior to 31 December, 2014. It, however, excludes Muslims - a decision viewed by many protesters as a breach of the Indian constitution.