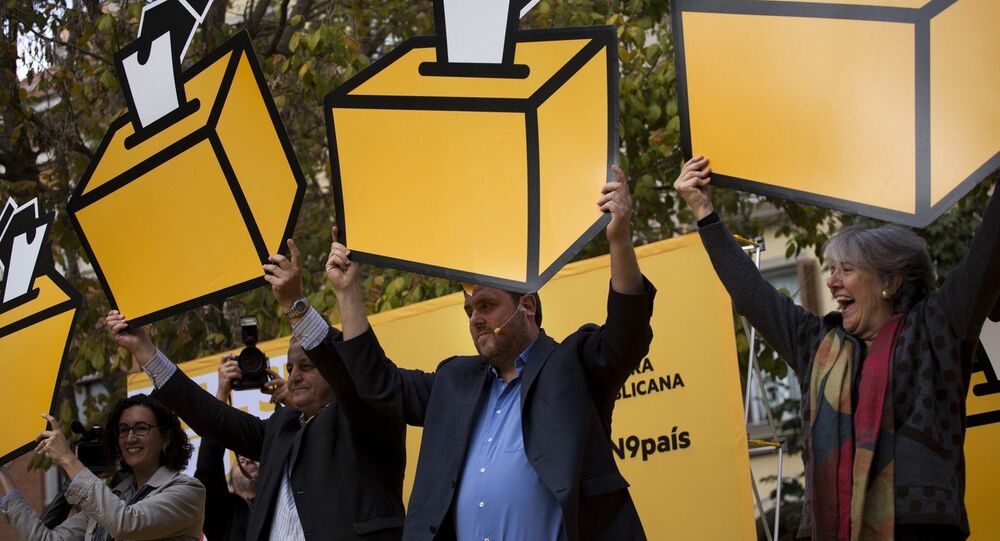 Results of the Referendum

Each year we make choices that affect our future – even more so when these choices are made by entire nations. In 2014 several regions around the world faced a dilemma – autonomy or unity.

The independence rush swept over Europe in early spring, but its motives have been there for decades. Take, for example, the Spanish district of Catalonia. One of the wealthiest regions of the country, it contributes 20 percent of Spain's GDP, but receives nothing in return from Madrid's government, says Xavier Arbós, Professor of constitutional law from the University of Barcelona.

“What invites many Catalans to be in favor of independence, it is not mainly a classic nationalism, in the sense of feeling themselves very different from the rest of Spaniards, because we have the language and so on. There is a feeling of being mistreated by the central Government, particularly in the fiscal system (that is perceived as not being fair), and in the restrictions on autonomy (on the very sensitive matters such as the teaching of our language at schools),” Xavier Arbós said.

The Spanish government naturally did everything to prevent the region from holding a legitimate referendum. It even suspended the vote through the National Constitutional Court. The Catalans, however, did not give up. In November they held a plebiscite, in which over two million residents took part. According to the organizers, 80 percent of voters opted for independence from Madrid. Just months before the Catalans went to the polls, their neighbors from the Italian region of Veneto made a similar statement. In the unofficial referendum held in Venice in March nearly 89 percent of the voters said addio! to Rome.

The reasons are almost identical to those that drove Catalans to seek independence. Italy’s wealthiest economic and trade region is strangled by fiscal pressure from the central government and its 5 million residents are simply tired of providing for the whole country. Another referendum was simultaneously held just across Europe — in a former Ukrainian republic of Crimea. Its mainly Russian-speaking population was unhappy with the politics of the new Kiev authorities that came to power following a military coup; thus nearly 97 percent of Crimeans favored reunification with the Russian Federation. Although the results of the voting were not recognized by the US and EU, the referendum was more democratic than many political moves taken by Western countries, says Manuel Ochsenreiter, Editor-in-Chief for Zuerst, a German monthly political magazine. He was an observer of the Crimean plebiscite.

“The whole Crimea was celebrating, it was a little bit like Germany on November, 9th, 1989 when the Wall came down: these people were celebrating reunification. It was hard to find anybody on Crimea who was against becoming Russian. The West, for example I'm coming from Germany, I never had the right to participate at any referendum about the decisive political project, I wasn't asked if I want to send soldiers to Afghanistan, I was never asked if I still want to be member of the NATO, I'm not asked if I wanted to have the EURO currency, I'm even not asked if I want to bail out Ukraine,” Manuel Ochsenreiter said.

Another dramatic referendum took place in Scotland in September. For the first time in British history, this 4-million-people nation was given the right to determine whether the 307-year-old kingdom would remain united. After months of aggressive campaigning and heated debates, 55 percent of Scots voted “no” to autonomy. UK leadership will have to make some drastic changes to domestic policies if the country is to remain intact in future after getting so close to losing Scotland, says Keith Cuthbertson, Professor of Finance at Cass Business School.

“I think the thing that comes out of it really, unfortunately, is how remote and aloof Westminster can appeal to anyone outside of the southeast, because that’s what the Scots were really concerned about. They felt that they weren’t getting a fair deal and wanted a slightly different economy, and a slightly different way of doing things than in England. Of course, the Westminster Government now will have to deliver on these relatively vague promises to Scotland. And that will be a big debate between now and the general election in May.”

It might seem like the 2014 secession trend is predominantly a European one, but take a look across the ocean, to the United States, where the country’s most popular resort Miami declared its intention to succeed from the Sunshine State of Florida. Residents of Miami blame state authorities for neglecting the safety of South Florida that suffers from rising water levels. By becoming America’s 51st state, they hope to protect themselves from sharing the fate of Atlantis. The US government might not take these demands as serious as their European counterparts just yet, but 2014 definitely was a year that called into the question the world's territorial integrity.

Court to Take up Disobedience Lawsuit Against Catalan Independence Vote

For First Time Since 2012, Catalans Reject Independence From Spain: Poll