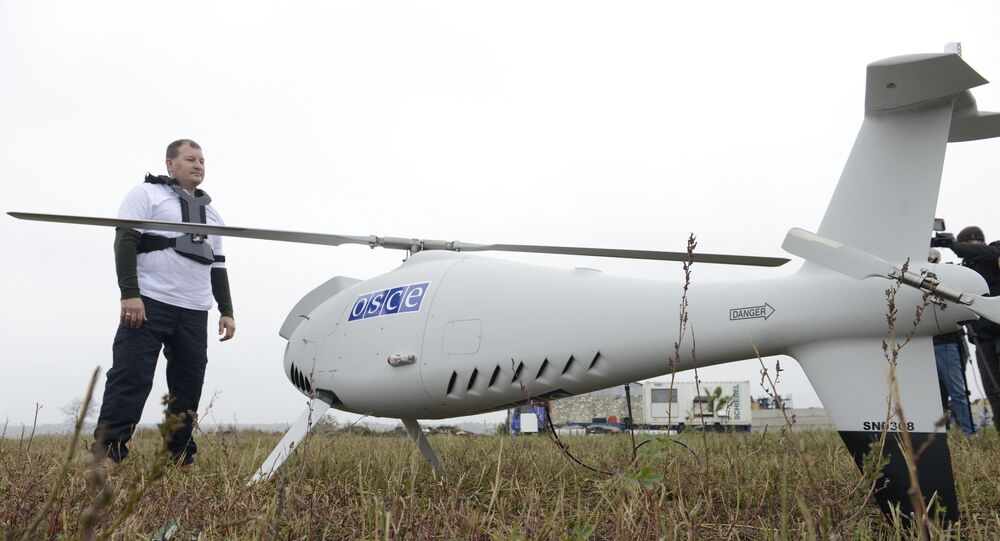 LUGANSK (Sputnik) - Ukraine's armed forces are waging electronic warfare aimed at hindering the work of OSCE monitoring drones at the contact line in Donbass, a spokesperson for the People's Militia of the self-proclaimed Lugansk People's Republic (LPR) said on Sunday.

The OSCE Special Monitoring Mission to Ukraine (SMM) told Sputnik in April that one of its monitoring drones was lost in eastern Ukraine in a non-government-controlled area as a result of a targeted attack. LPR leader Leonid Pasechnik has told Sputnik that Lugansk forces never targeted SMM drones.

"Ukrainian militants continue to hamper the work of the OSCE observers", the LPR official told reporters, adding that the republic's intelligence has found weapons and equipment of the Ukrainian security forces in residential areas of 11 settlements of the contact line controlled by Kiev.

According to the spokesperson, a Bukovel-AD electronic warfare system belonging to the Ukrainian security forces was discovered in ​​the Kiev-controlled settlement of Novoaleksandrovka. It was used for signal interference of the OSCE SMM drones.

The Ukrainian military is also said to be deploying armoured vehicles and anti-aircraft warfare near the contact line.

"Despite the absence of fire provocations, the enemy continues to violate their obligations", the official said.

Kiev launched a military operation against Lugansk and Donetsk in 2014. There have been many attempts to resolve the conflict or, at the very least, end hostilities. Prospects for peace have been discussed at various platforms, including the Trilateral Contact Group, which, since September 2014, has already adopted three documents containing steps to de-escalate the conflict.