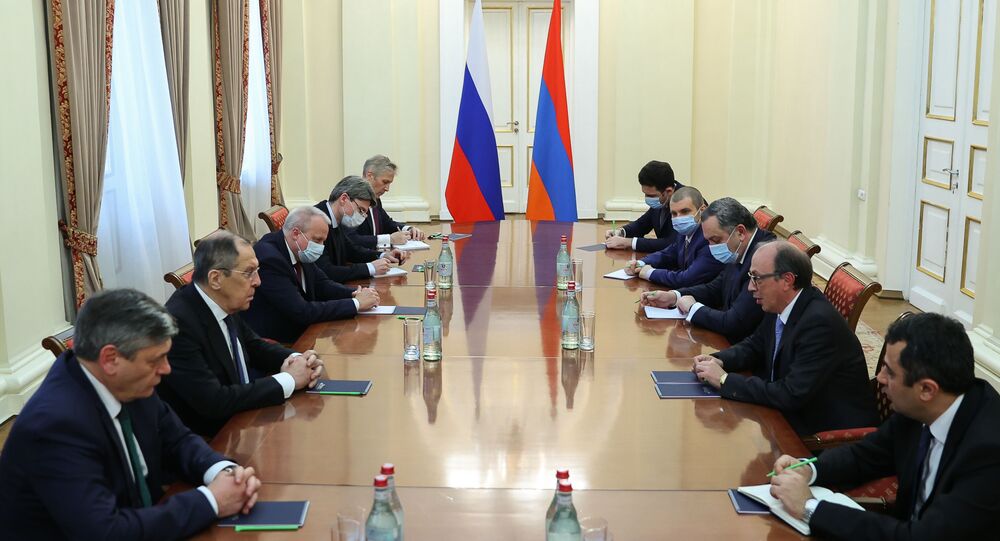 Russia's Lavrov to Discuss Nagorno-Karabakh With Armenia's Leadership in Yerevan

YEREVAN (Sputnik) - Russian Foreign Minister Sergey Lavrov will visit Yerevan, where, at meetings with Armenia's acting prime minister, Nikol Pashinyan, and acting foreign minister, Ara Ayvazyan, he plans to discuss bilateral and regional issues with an emphasis on the situation in Nagorno-Karabakh.

A few days after his visit to Armenia, Lavrov is expected to visit Baku (May 10-11).

Shortly before Lavrov's visit, the Russian Foreign Ministry said that at meetings with the Armenian leadership, the minister intends to discuss a wide range of issues of bilateral interaction, regional cooperation, foreign policy coordination in the Eurasian Economic Union (EAEU), Collective Security Treaty Organization (CSTO) and the CIS, UN, OSCE, the Council of Europe and other international platforms.

"One of the key topics will be consideration of practical aspects of implementing the statements of the Azerbaijani president, the prime minister of Armenia and the president of Russia dated November 9, 2020, and January 11, 2021, including humanitarian assistance to the affected population and restoration of infrastructure in Nagorno-Karabakh, unblocking of economic and transport communications in the region," the Russian ministry said.

At the end of September 2020, hostilities resumed in Nagorno-Karabakh, the continuation of a long-term conflict, and led to casualties among the civilian population. The sides made several attempts to sign a truce, but only the tripartite agreement reached overnight on November 10, 2020, turned out to be successful.

With the mediation of Moscow, Azerbaijan and Armenia agreed to completely cease hostilities and exchange prisoners and the bodies of the dead. Yerevan also transferred the Kalbajar, Lachin and Agdam districts to Baku. Russian peacekeepers were stationed in the region.

The conflict in Nagorno-Karabakh began in February 1988, when the Nagorno-Karabakh Autonomous Region announced its secession from the Azerbaijani Soviet Socialist Republic. During an armed confrontation in 1992-1994, Azerbaijan lost control of Nagorno-Karabakh and its adjacent areas. Since 1992, talks have been ongoing on the peaceful settlement of the conflict, with the mediation of the OSCE Minsk Group, led by Russia, the United States and France.

Lavrov: Russia Has 'Some Ideas' on How to Resume Israeli-Palestinian Peace Process