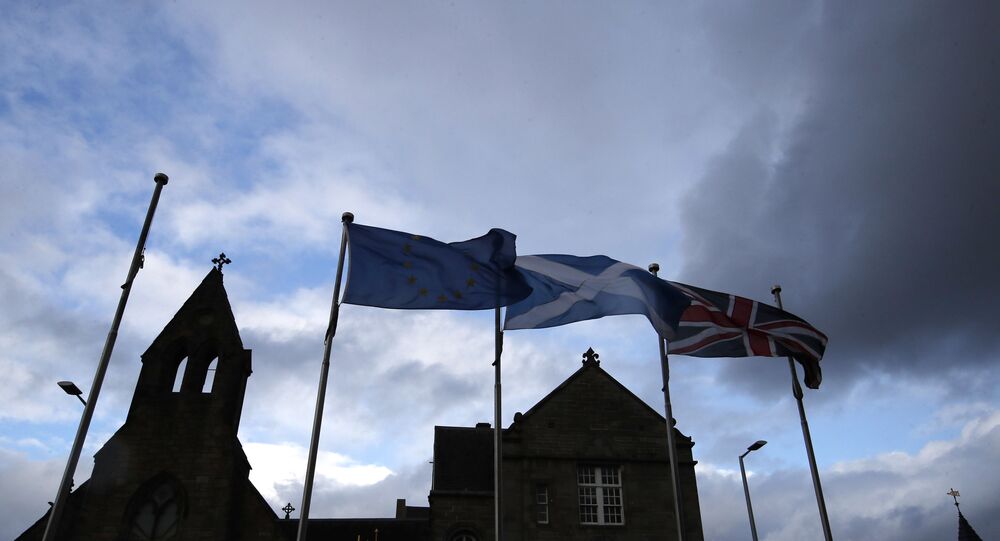 Scotland has already had an independence referendum in 2014; back then, 55 percent of voters cast ballots in favour of remaining in the United Kingdom.

More than 170 prominent cultural figures from across the European Union have signed a letter, calling on the bloc to make a “unilateral and open offer” to Scotland to rejoin the EU if it votes for independence in a future referendum.

The letter was published across Europe on Thursday. It is available online, and has been translated into 19 European languages for others to co-sign, with the Italian novelist Elena Ferrante, the Slovenian philosopher Slavoj Žižek, the English director Richard Eyre and the Greek political scientist Kalypso Nicolaïdis among the signatories. The informal group Europe for Scotland is behind the move to organise it.

© AP Photo / Jeff J Mitchell
Nicola Sturgeon Says Boris Johnson Likely to Allow Second Scottish Referendum if SNP Wins
The letter asks for the recognition of the special position of Scotland, highlighting the path for the country to return as an EU member before any referendum takes place, allowing the voters to make an informed choice.

“The EU and its member states should make a unilateral and open offer of membership: an exceptional proposal to match Scotland’s exceptional circumstances,” the letter reads.

“Generous terms should be offered to support Scotland’s budget in the challenging months of the transition before rejoining the EU.”

The Scottish Parliament elections, which are usually held every four years, will take place on 6 May. The Sunday Times earlier reported that senior Tories believed that it would be hard to sustain the opposition to granting Holyrood the requisite powers to hold a legal referendum, should the SNP win. Prime Minister Boris Johnson has repeatedly rejected calls for a second Scottish referendum, stressing that the previous vote had already resolved the issue.

© Sputnik / Robert Perry
Scottish Independence & Desired EU Membership Decade Away - Think Tank Report
The signatories to the letter described the impasse where London refuses to grant Holyrood the legal powers required to hold a second referendum, regardless of the outcome of next week’s election, as “unprecedented” and one that “demands fresh thinking from the EU”.

Scottish First Minister Nicola Sturgeon previously stated that “the vast majority of people in Scotland want to rejoin the EU,” suggesting that there would be no additional referendum necessary to re-enter the European Union if the independence vote is successful. In the June 2016 Brexit referendum, 62 percent of Scots voted to remain in the EU.