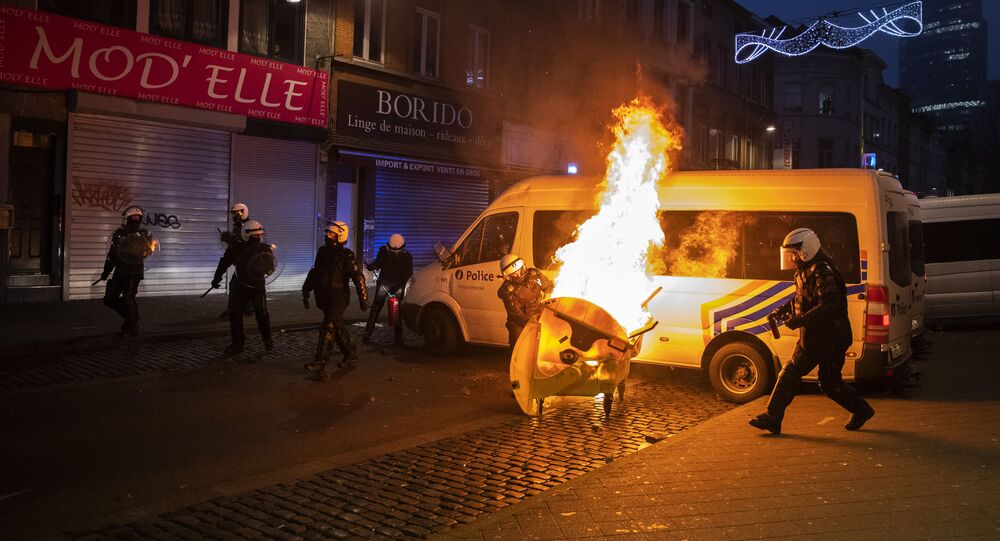 According to reports by local media, the Belgian capital city saw protests following the death of a young man in police custody. The man reportedly tried to escape from officers when they asked for his documents.

Brussels saw massive civil unrest on Wednesday evening, with protests evolving from peaceful demonstrations near the police station in the Brabantstraat area, to rioters setting the station on fire.

Local media reported that a peaceful demonstration ended around 4 p.m., local time, as protesters then started to throw projectiles at police officers and set fireworks, with police using water cannons to disperse them.​

The Belgian police, according to AFP, conducted several arrests after the protests came to an end.

"Calm has returned," said Audrey Dereymaeker, the spokesperson for the Brussels-North police, cited by AFP. He also mentioned "incidents", such as "degradation of street furniture and vehicles", as well as "jets of projectiles "against the police.

Several videos emerged on social media, revealing the police station on fire, protesters launching fireworks and a car alleged to be owned by the Belgium king stuck in the riot.

Migrants rioting in Brussels tonight following the death of a migrant criminal during arrest on Saturday. pic.twitter.com/BbHwKz6NUv

Migrants attack the king of Belgium's motorcade during the riots. pic.twitter.com/ndirZMc7hV

chaos on the streets of Brussels, the home of the EU, as immigrants rampage. pic.twitter.com/7P8pJ3B2mR

​The unrest began after a young man reportedly named Ibrahima died in police custody following what was claimed to have been an attempt to escape from officers during the check. According to reports, police were checking a social gathering that was potentially breaching coronavirus-related restrictions.

The circumstances of the man's death remain unclear, and an investigation has been launched, according to AFP citing the Brussels public prosecutor's office.

'Not My Government': Belgium’s Nationalists Form a Protest Convoy, Rally in Brussels