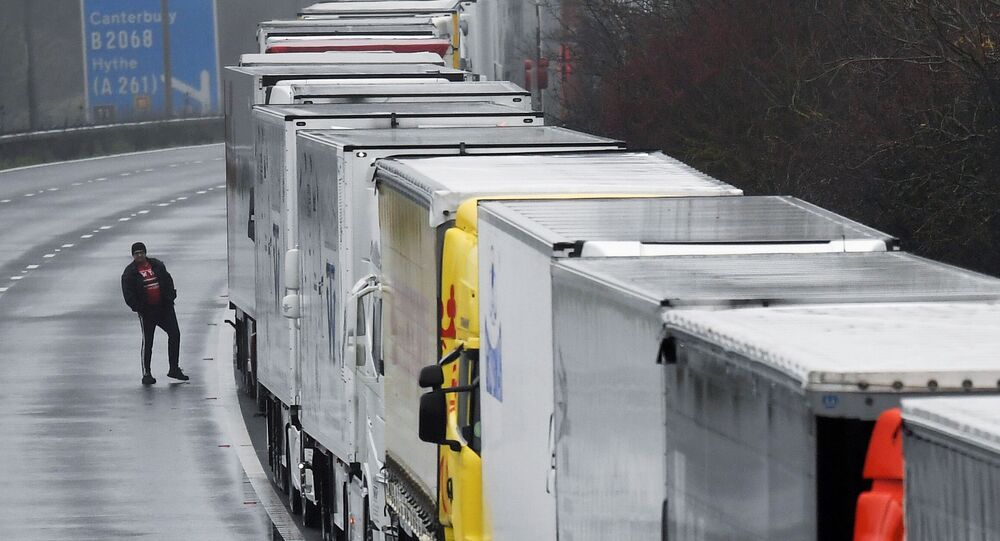 Several countries have shut their borders to Britain - including France, Germany, Italy, the Netherlands, Austria, Ireland, Belgium and Canada - over fears about a new, highly infectious COVID-19 strain identified in the UK that may be associated with faster spread of the disease.

Countries across the globe continued to close their borders to Britain after health experts revealed last week that a new variant of SARS-CoV-2, the virus that causes COVID-19, has emerged in the country.

France has closed down its border to arrivals of people and trucks from Britain whether by road, air, sea or rail, shutting down one of the most vital trade arteries, the port of Dover, with mainland Europe, Reuters reported. The port of Dover, the nearest English port to France, was also shut down, causing miles of truck backups. The ban was scheduled to be in place for 48 hours starting Sunday.

UK Transport Secretary Grant Shapps on Monday said it was somewhat surprising that France had shut down its border to freight, according to The Guardian.

A Monday report by the BBC said that Britain and France may not reach an agreement over reopening their borders by Monday night, which may lead to continued travel mayhem and even food shortages just days before Britain is set to leave the European Union.

India, Pakistan, Poland, Spain, Switzerland, Sweden, Russia, Jordan and Hong Kong have suspended travel for Britons after UK Prime Minister Boris Johnson revealed that a highly contagious, mutated variant of the coronavirus had been found in the country. Saudi Arabia, Kuwait and Oman shut down their borders completely.

On Monday, New York Governor Andrew Cuomo urged the US government to take proactive actions to prevent the new COVID-19 strain from entering the US. New York is among the states hit hardest by the disease, with more than 36,500 COVID-19-related deaths.

“It’s high time the federal government takes swift action, because today that variant is getting on a plane and landing in JFK, and all it takes is one person,” Cuomo said, according to Reuters.

The new COVID-19 variant is believed to be 70% more contagious than other variants, Johnson revealed Saturday evening.

“It is with a very heavy heart, I must tell you we cannot continue with Christmas as planned,” Johnson said on Saturday. “There’s no evidence that it causes more severe illness or higher mortality, but it does appear to be passed on significantly more easily. And although there’s considerable uncertainty, it may be up to 70% more transmissible than the original version of the disease."

According to Muge Cevik, an infectious disease expert at the University of St. Andrews in Scotland and a scientific adviser to the British government, the 70% estimate is based on modeling and has not been confirmed by lab experiments, the New York Times reported.

According to the World Health Organization (WHO), whenever a virus replicates, it slightly changes. Such changes are referred to as “mutations.”

Although SARS-CoV-2 changes more slowly than other viruses like HIV or influenza due to an internal “proofreading mechanism” that corrects mistakes when the virus replicates, it still has the ability to mutate. Most mutations do not affect the properties of the virus. However, they occasionally “result in a virus variant that is better adapted to its environment compared to the original virus.”

“In that case, it can become dominant in a specific environment. This process of selection of successful variants is called ‘viral evolution’ and this is a natural process all viruses go through,” the WHO explains.