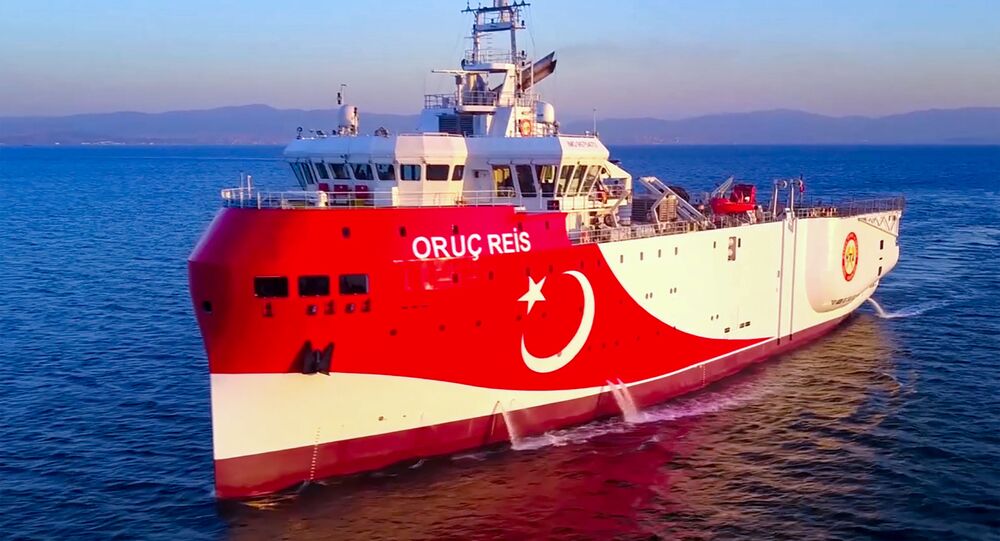 Already fraught relations between Greece and Turkey worsened this month after Ankara dispatched its Oruc Reis oil and gas seismic survey vessel to a disputed area of Mediterranean Sea also claimed by Athens.

Turkish Vice President Fuat Oktay has attacked as “hypocritical” a threat by the EU to impose sanctions on Ankara over its soaring tensions in the eastern Mediterranean with neighbour Greece.

In a Tweet, Oktay issued a scathing rebuke of the EU’s position, saying that, “It is hypocritical for the European Union to call for dialogue and, simultaneously, make other plans regarding Turkey's activities within our continental shelf in the Eastern Mediterranean.”

“We are proficient in the language of peace and diplomacy, but do not hesitate to do the necessary thing when it comes to defending Turkey's rights and interests. France and Greece know that better than anyone,” he added.

Oktay’s comments come hot on the heels of a statement by EU Foreign Policy Chief, Josep Borrell, who said that the bloc was preparing to slap sanctions on Turkey - including harsh economic measures - unless it make speedy efforts toward reducing rapidly deteriorating relations with both Greece and Cyprus in the eastern Mediterranean region.

The measures, if imposed, would seek to curtail Turkey’s ability to explore for natural gas in the famously contested waters of the region, and could, according to Mr Borrell, target individuals, Turkish ships and the use of European ports.

“We can go to measures related to sectoral activities… where the Turkish economy is related to the European economy,” Mr Borrell told a news conference recently in reference to the possible sanctions.

The EU would, Mr Borrell noted, focus on all “activities we consider illegal.”

The long-simmering dispute between Turkey and Greece - both NATO member states - started to boil over after both agreed to rival accords on maritime zones with Libya and Egypt.

Turkey and the UN-backed Government of National Accord in Libya - whom Ankara has been providing substantial military support to in that country’s ongoing civil war - struck an accord in late 2019 that allowed Turkey to access areas in the region where sizeable hydrocarbon resources have been found.

Then, at the beginning of August, Egypt and Greece signed a rival agreement - one that Turkey declared “null and void” - to jointly explore their exclusive economic zones for marine resources.

Both sides have continued to lock horns over who has legitimate rights over hydrocarbon resources in the region as a result of conflicting claims about the extent of their continental shelves.

Ominous signs of the potential for the militarisation of the dispute have started to emerge.

On Friday, August 28, Turkey declared that it would hold military drills off northwest Cyprus in the coming weeks.

Following that, the Turkish military issued a warning to mariners, known as a Navtex, which said it would be holding “gunnery exercise” from Saturday August 29 until September 11.

Before that, on August 12, Greek and Turkish frigates that were following one of Ankara’s oil and gas survey ships, the Oruc Reis, collided.

Turkish and Greek F-16 fighter jets engaged in what The Times described as a “dogfight” over the Mediterranean as Ankara dispatched its planes to intercept six Greek jets as they returned from war games in Cyprus.