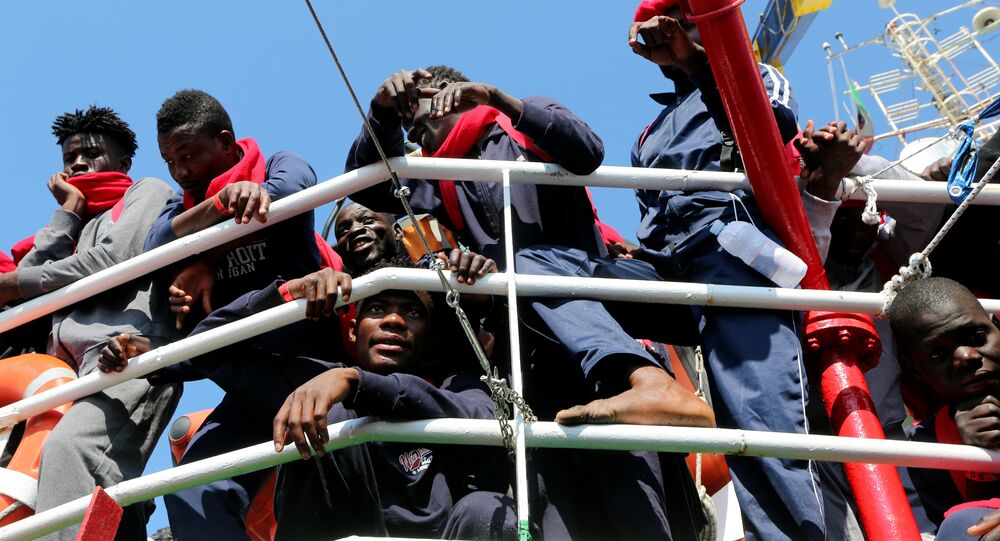 Journalist on Migration to Italy: 'Many of Refugees Have Coronavirus, It Causes Panic Among People'

The influx of migrants to Italy has not stopped irrespective of the epidemic, quarantine and isolation. While other countries rushed to close borders for security reasons, boats with migrants continued to arrive at Sicilian ports, significantly exceeding the 2019 figures.

During such a delicate and complex period of the coronavirus epidemic, many Sicilian municipalities were confronted with a sharp increase in the influx of migrants. Ida Carmina, Mayor of Porto Empedocle (from the Five Star Movement party), asked the government for concrete assistance:

"There are no coronavirus patients in our city, but we have to suffer because of something we can't possibly influence. The government must put an end to this, and before they say anything, let them come here and see our problems with their own eyes."

Meanwhile, migrants arriving in Porto Empedocle aboard the NGO boat will be moved for quarantine to Moby Zazà ferry.

This problem not only damages the image of Porto Empedocle, as well as that of other Sicilian ports, it is also dangerous from the sanitary standpoint, as coronavirus-infected migrants arrive. Mauro Indelicato, the editor-in-chief of Infoagrigento.it and the editor of a major newspaper Il Giornale, reflects on the current situation with migration into Italy amid continuing coronavirus pandemic.

Sputnik: Can we say that we are now seeing a huge surge in migrant arrivals compared to the previous year? What is the situation at the moment?

Mauro Indelicato: The data provided by the Ministry of the Interior clearly show that 162 per cent more migrants arrived than in the first half of 2019. It should be taken into account that there was also a period of isolation, in March and April the number of migrants arrived decreased and despite this, there was still such a significant increase. And let us not forget the health emergency, which, in general, has created many problems for the entire admission system in Italy.

Sputnik: From a healthcare standpoint, the situation is very difficult. What is the present situation in the cities and ports of Sicily?

Mauro Indelicato: I myself live in Sicily and, together with my colleague Sofia Dinolfo, we have been following the first landings since the quarantine in April. We understood that the Italians were extremely dissatisfied with this situation. Already in April, the public sentiment had seriously exacerbated. When entire cities were forced to stay at home, not to work, and at the same time to observe that the disembarkation did not stop and that migrants continued to be received, it made people extremely angry.

In Sicily, as early as April, many mayors asked the government to take immediate action. Mayors also appealed to the prefects, saying that the presence of migrants in some structures clearly contradicts the rules of the fight against the coronavirus. Many citizens took to the streets to protest in order to prompt their administrations to find a solution to a problem that was becoming increasingly difficult.

And as of today, the situation has reached a boiling point.

The number of incoming migrants is increasing, many of them have coronavirus, and it causes panic among people. Italians are aware that coronavirus is approaching its peak in Libya and they are afraid that more infections will be brought in from there.

Sputnik: The Mayor of Porto Empedocle (from the Five Stars Movement) demands that the government must take concrete measures to deal with the disembarkation and this grave situation in general.

Mauro Indelicato: The situation in Porto Empedocle is indicative. The Moby Zazà ferry has been operating there since May, where migrants have to discharge the quarantine. It was supposed to calm people down, but in fact, it has a small capacity, and it is not cheap. Just for you to understand, it costs €900,000 a month. Because of its mooring in Porto Empedocle, no tourists returned. Sicily lives in fear of being left alone and a migrant crisis will replace the coronavirus epidemic with even greater economic consequences for society.

Sputnik: What is the role of NGO vessels in all this?

Mauro Indelicato: In June, the NGO ships started operating at full capacity again. During the quarantine, the vessels Aita Mari and Alan Kurdi were mooring in Palermo. Because of them, the number of migrants arriving in our country is increasing. However, on the whole, more migrants are brought by autonomous vessels, the so-called “ghosts”, which carry thousands of people bypassing Italian border controls.

Today, NGOs play a politically larger role, and their presence in the territorial waters and in Porto Empedocle is causing widespread misunderstanding among the population. And the fact that coronavirus-infected migrants arrived mostly on NGO ships further contributes to tensions in society.

Sputnik: When Matteo Salvini was Minister of the Interior, the number of migrants arriving was much lower than it is now. Do you think that politicians can really influence the situation or the flow of migrants is a phenomenon that cannot be stopped?

Mauro Indelicato: The phenomenon of migration undoubtedly cannot be stopped on its own, but the desire of politicians to influence the flow of illegal migrants is extremely important. Earlier, I mentioned the figures in Italy. You can also refer to the statistics of Greece and Spain. In the latter, the socialists are in charge, in Greece – the centre-right, that is, they have the opposite policy as a whole. However, both countries address the issue of migrants much tougher.

Greece has closed its land and maritime borders with Turkey, which has reduced the influx of migrants. Now the East Mediterranean route is indeed used by migrants more often but there have been 4,000 fewer disembarkments compared to last year.

In Spain, the socialist government of Sanchez has followed a stricter line with NGOs for a year and a half, which has also led to a decrease in migration flows. Migrant flows do not govern themselves, and if policymakers take the initiative, things can change.

Sputnik: The current Italian government once again hopes that the EU will help with the redistribution of migrants. Italy has little chance to solve this problem by relying only on the EU, hasn't it?

Mauro Indelicato: The government is now trying to address the problem with the Dublin Regulation, which has been doing nothing but giving Italy a headache for 30 years. According to this very document, the country of the first landing has the honour of receiving the migrant. And I doubt that in 2-3 months Italy will be able to do what it has not done in 30 years. And the fact that the government is more counting on the redistribution of migrants and the revision of the agreement leads me to complete confusion.