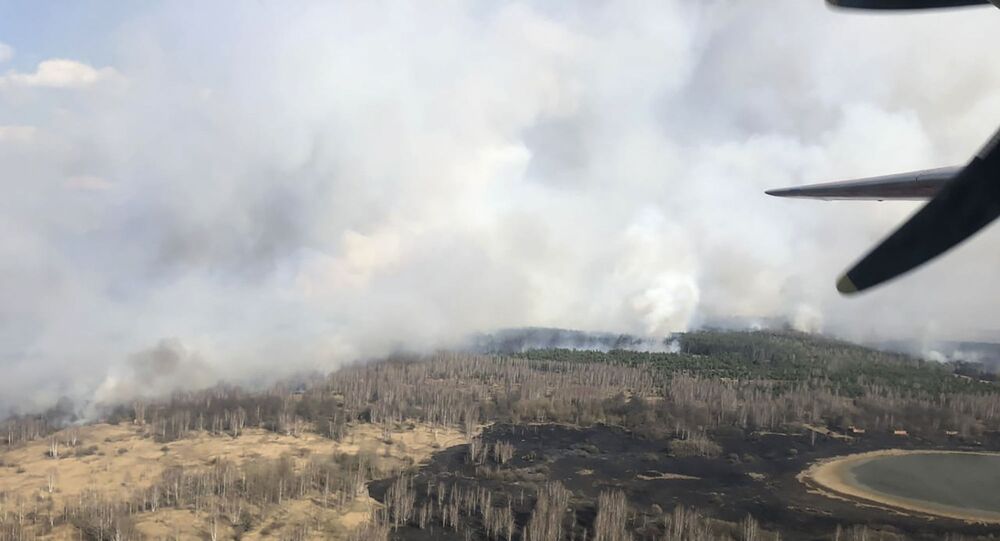 Ukrainian firefighters continue to combat a fire that originated in the Chernobyl Exclusion Zone, established after the nuclear disaster of 1986, with the fire reportedly covering 20 hectares.

The level of radiation in Ukraine's Chernobyl Exclusion Zone is 14 times higher than the normal rate, as forest fires are still raging in the area, according to Ukrainian lawmaker Egor Firsov.

"[Here] is the bad news - the radiation is above normal in the epicentre of the fire. As you see in the video, the [radiation dosimeter] shows 2.3 mR/h, while the norm is 0.14 mR/h", Firsov wrote on his official Facebook page on Sunday.

Firsov believes the cause of the forest fires was arson.

"As it often happens now, someone set the grass on fire first, and then the fire spread to the trees...", Firsov wrote.

The lawmaker also called for a higher arson penalty.

On Sunday, the State Emergency Service of Ukraine (SES) said it was dealing with a fire in the Exclusion Zone that has spread to an area of 20 hectares. It also added later that the radiation level in Kiev, the capital of Ukraine, does not exceed the 15-year-old standard of 0.014 mR/h.

The emergency service also shared a video on its YouTube page showing fire raging in the area.

Massive fires started in Chernobyl's forests on Saturday. The authorities have since been trying to extinguish the fires with the help of aviation and about 50 tonnes of water so far.

The Chernobyl Exclusion Zone was established after a nuclear accident occurred at the No. 4 nuclear reactor in the Chernobyl Nuclear Power Plant in April 1986. The disaster resulted in a large number of people displaced and vast areas contaminated.