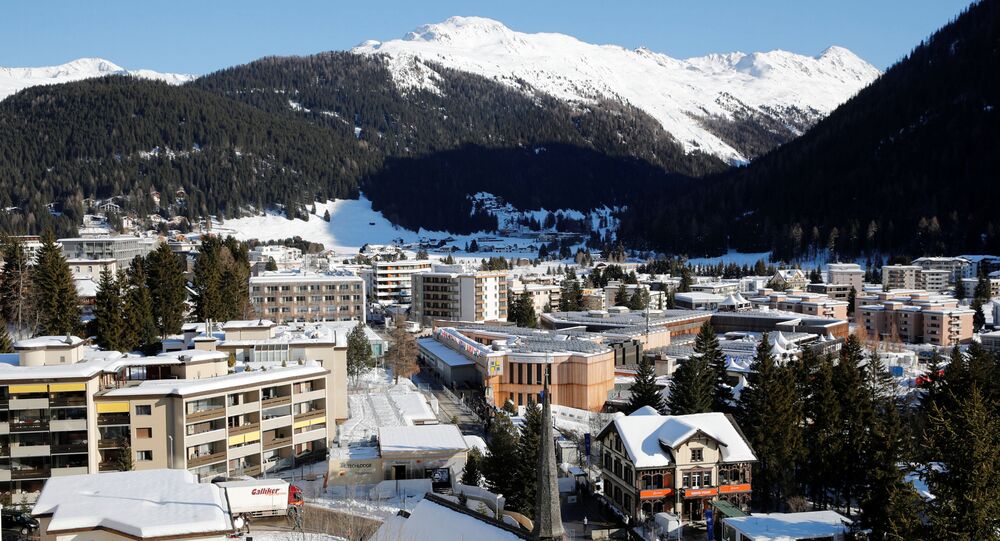 This year’s meeting of global elites, which was comprised mainly of politicians, bankers and celebrities, was marked and influenced by the climate change agenda. But for some reason, WEF-2020 was attended by less participants than last year’s event.

With only 50 world leaders and 2,800 participants in attendance, which is significantly lower than last year’s numbers (about 80 and 3,000 respectively), WEF-2020 looked quite unusual. Instead of the traditional "old style" luxury brands, it embraced newer, eco-friendly products.

The elites at WEF, represented mostly by bankers, celebrities and other public figures, seem to have adapted (at least on the outside) to the latest “green” trends: some Teslas, electric bubble-car Microlino and sun-powered Lightyear One on Promenade instead of Maybach limos. pic.twitter.com/02pLENaAQf

Despite the fact that most locals seem to be fine with Davos hosting the annual meeting of the global elite, the forum has strong opponents who travel from other parts from Switzerland and even from other countries to hold rallies against it. The essence of “the resistance movement” changes from one year to another. While the 2019 protests focused on anti-war rhetoric, this year the activists chose to focus on supporting the ideas of 17-year-old Swedish climate activist Greta Thunberg.

Climate activists did what they could to make themselves seen and heard at WEF-2020. Some circled the nearby helipad ahead of Trump’s arrival to spell a giant “Eat the rich” slogan in the snow, others gathered by Davos town hall to warn about climate change at a rally. pic.twitter.com/iiGJwHhmSO

Climate protests, however, did not disrupt the forum's main program. The Russian delegation experienced a major shake-up ahead of this year’s WEF, with the entire government resigning less than a week before the event. Nevertheless, Russia’s minister of economic development Maksim Oreshkin decided to go to Davos. He took part in several meetings, including panel discussions at the Russian House – the country’s permanent WEF residence.

On Tuesday, the venue hosted a session on Russia-Qatar cooperation and investment trends and was attended by a high-level Doha delegation. Qatar has invested around $14 billion in Russia in the past four years, and according to Al Thani Ali Alwaleed, the CEO of Qatar’s Investment Promotion Agency, Doha is currently working on improving the quality of its direct investment portfolios. Doha is planning to focus on sectors other than the oil and gas industries, with digital industry among its top priorities:

Russia’s business delegation at the WEF-2020 was also focusing on investment opportunities. Representatives of the Russian Direct Investment Fund (RDIF) held meetings with more than 30 existing and potential partners from the Middle East, Asia, the USA and Europe, with the fund’s CEO Kirill Dmitriev taking part in panel discussions on Russia's investment climate, AI and energy.

On Thursday at the WEF’s “Global Energy Challenge” discussion, Dmitriev addressed the US sanctions against the Nord Stream-2 project, which have affected EU companies, saying that these restrictive measures are in the way of Europe’s transition to safer fuel:

“Russia believes gas is very ecologically friendly. It produces 45% less emissions than coal and 30% less than oil. And obviously Russia is big oil & gas player, the biggest gas player in the world with 25% reserves, 20% of exports. And we will continue to grow gas more. So we expect to grow gas exports by 34% in the next 20 years, by oil exports we will grow only around 12%.”

The World Economic Forum is a Switzerland-based NGO which also has offices in the US, China and Japan. It hosts an annual meeting for top-level politicians, business leaders, economists, celebrities and journalists from all over the world.

Soviet - and later Russian - delegations have been attending WEF sessions in Davos since 1987.