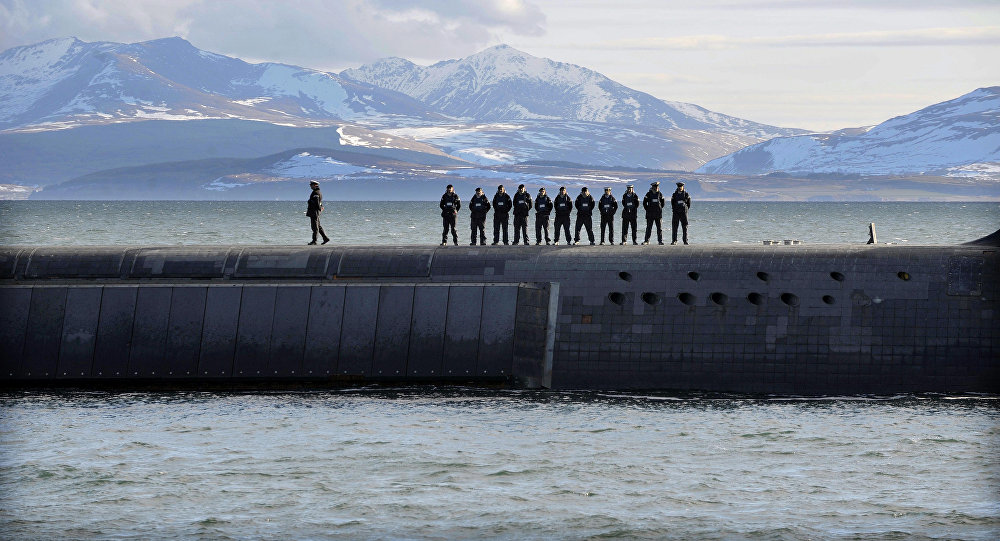 As the UK gears up for the approaching 12 December general election, the Scottish National Party’s chief Nicola Sturgeon has warned Jeremy Corbyn of her intent to “drive a hard bargain” in coalition talks with Labour to “lock the Tories out of government.”

UK Defence Secretary Ben Wallace has warned that a governing pact between Labour and the Scottish National Party would put the country’s security at risk, reported The Sunday Times.

The statement comes on the heels of SNP defence spokesman Stewart McDonald reaffirming that the removal of the Trident nuclear submarine fleet from the Faslane naval base in Scotland would be central to any agreement with the Labour Party in the event of a general election win.

“The first minister has made our priorities clear: we want to stop Brexit, and she will demand Scotland has the power to hold its own independence referendum. But discussions over Trident will be a priority,” The Sunday Telegraph quotes McDonald as saying.

The SNP's senior MEP Alyn Smith on Friday said he understood that Jeremy Corbyn was also willing to agree to remove Trident from Faslane as part of a pact to prop up Labour after the December elections.

“It’s increasingly clear that Jeremy Corbyn will sell out Scotland to the SNP. He’s happy to trade a second independence referendum in exchange for the keys to Number 10.”

The SNP has long opposed the storing of nuclear weapons in Scotland, arguing that Trident is a relic from the Cold War, while there are better ways to keep Britain safe.

© AFP 2019 / LESLEY MARTIN
Protesters calling for an end to the Trident nuclear programme holds placards at a blockade in the road in front of HM Naval Base Clyde in Faslane, Scotland, northeast of Glasgow, on April 13, 2015 the UK base for Trident

Trident is controlled by the Royal Navy from a Scottish base, called HM Naval Base Clyde, in Faslane on the River Clyde.

The SNP says that most countries are now “nuclear-fee” and Trident does not address growing modern threats such as cyberattacks and terrorism.

First Minister of Scotland and leader of the Scottish National Party (SNP) Nicola Sturgeon launched her party’s election campaign in Edinburgh on 7 November with a warning to Labour leader Jeremy Corbyn she would “drive a hard bargain” in coalition talks to “lock the Tories out of government”.

​Sturgeon told the Labour leader he would have to accept her party’s plan to hold a second independence referendum next year in return for its support.

“Jeremy Corbyn is someone who supports self-determination for literally every other country in the world. It would be mighty strange if he didn’t support it for Scotland,” said the Scottish politician.

“The comments he has made and the comments John McDonnell [the shadow chancellor] has made have given a pretty clear sense of the direction of Labour’s travel on this.”

“I can’t see the SNP being in a formal coalition but we would look to form alliances and we’d drive a hard bargain on issues we want to advance,” Sturgeon was quoted by The Sun as saying.

“I’m not a big fan of Jeremy Corbyn, but we have to work with what we have before us,” said Sturgeon.

Sturgeon herself has ruled out doing a formal deal with Labour, saying the SNP would vote on a policy-by-policy basis.

Earlier, in August, Corbyn and McDonnell said the party would agree to give the Scottish parliament the powers to hold that referendum if Holyrood demanded them, while since hardening its stance by stating it would not authorise one in the first few years of a Labour government, and would oblige Sturgeon to seek a mandate for independence in the 2021 Holyrood election.

UK Prime Minister Boris Johnson said in an interview with Sky News on 3 November that he would not grant permission to Scotland to hold another independence referendum, pushed by First Minister Nicola Sturgeon amid looming Brexit, arguing that the Scottish people had already expressed their opinion on the matter in 2014.

On other outstanding issues, the SNP is set to table a new NHS protection bill in the Commons after the election to ensure the NHS is not included in future trade deals.

The SNP would also demand tougher action on climate change at UK level, while asking for powers over migration, employment law and drug policy to be devolved to Holyrood.

Ahead of the pre-Christmas election Scottish opinion polls suggest the SNP will increase its number of Westminster seats to around 45, regaining some of those it lost in the 2017 snap election.

It currently holds 35 out of Scotland’s 59 Westminster constituencies.

But can't take anything for granted - it'll all come down to whether people come out and vote SNP on 12th December #GE19 #EscapeBrexit #VoteSNP pic.twitter.com/zWpTxCaLX0

​Sturgeon has made clear she would regard that result as a clear mandate in favour of a second independence vote.

With the elections around the corner, the importance of Scotland is not to be underestimated as if the Tories can hold on to the 13 seats they won there in 2017 it could play into the hands of PM Boris Johnson who is seeking an overall majority to get his Brexit deal “done and dusted”.

However, if the SNP can wipe the Tories out, a hung parliament, with a Corbyn premiership, is a possibility, and another referendum on Scotland’s independence more tangible, writes the NewStatesman.

Corbyn’s Labour for England and Wales – SNP for Scotland