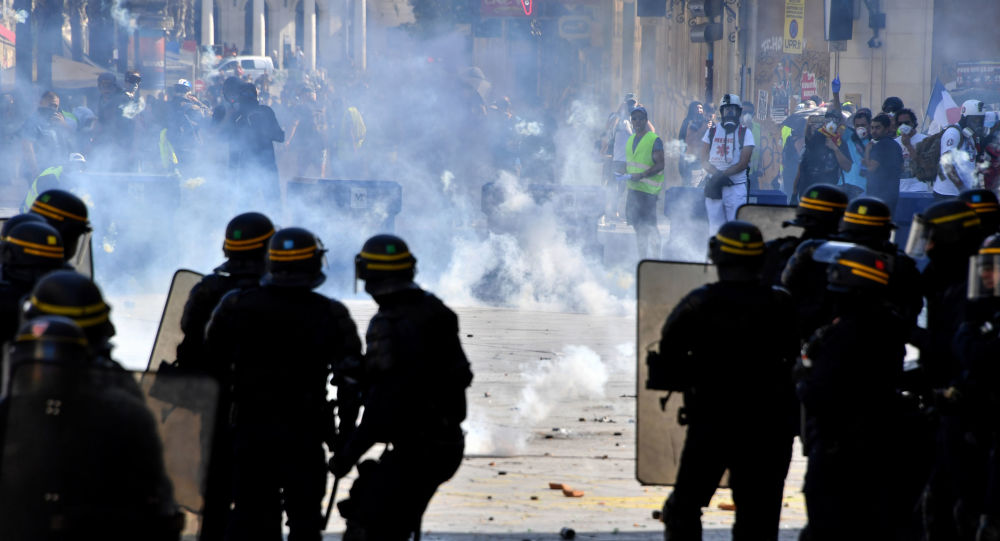 Demonstrations took place in Paris, Bordeaux, Montpellier and Rouen as part of Yellow Vests' Act 43 rally. In some cities, the protests turned violent after clashes between the participants and riot police.

The 43rd week of the Yellow Vests movement has been overshadowed by violence amid clashes between protesters and police. The first clashes were reported in Rouen.

"The demonstrators threw projectiles on the police. Summations were made and there was the use of tear gas in response to the throwing of projectiles, the protesters were rejected and returned outside the perimeter," the sub-prefect of permanence, Jean-Éric Winckler, said as quoted by AFP.

​In Montpellier, between 1,500 and 3,000 people took part in the rally, with clashes also reported near the city's station. According to AFP, some of the protesters fired projectiles, prompting the police to use tear gas.

​Some incidents and clashes were also reported in Lille, where more than 600 protesters took part in the rally (according to a police source), while the Yellow Vests say the number of demonstrators there stood at 1,500.

Meanwhile, during a rally in Paris, an emblematic figure of the Yellow Vests movement, Éric Drouet, was fined twice "for organizing an undeclared event" and was ordered to leave the perimeter.

The wave of Yellow Vests rallies started in France in November of 2018 over planned hikes in fuel taxes. While the French government has abandoned its plans to raise fuel taxes and introduced other measures to improve the country's socio-economic situation, protesters continue to take to the streets across France every weekend for demonstrations to express their discontent with the government's policies.