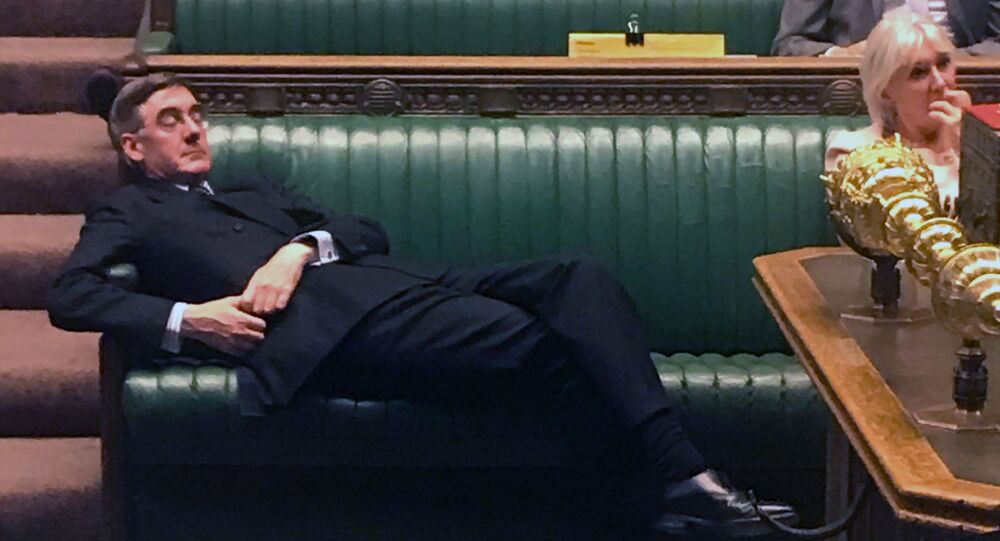 The heated talks in the British Parliament last night led to overall 21 expulsions from the Tories’ ranks, as they publicly rejected the much talked-of no-deal EU divorce plan. However, even the procedure and timing happened to be of interest in this unfolding political theatre.

A three-hour late-night debate on Brexit appeared too tense and exhausting for many, and Leader of the House of Commons Jacob Rees-Mogg was no exception.

He stretched out, half-seated, on the House’s leather bench and apparently dropped into a sweet sleep and revelling in the dream world. He didn’t even move as opposition benches insistently shouted out requests at him to sit up and literally wake up to the importance of the agenda.

The sight of Rees-Mogg slouching on the sofa naturally couldn’t go unnoticed in today’s era of smartphones, with actor Hugh Lauri branding the behaviour "insolent" and "insufferable", as the respective picture set off on a big journey across the Internet.

Others viewed the awkward moment as an allegory denoting limbo in Parliament amid the urgent need to resolve the longstanding Brexit crunch, while there were also those who perceived the complacent posture of the Commons head as a cue that the resolutions had already been made at some grand elitist level and that traditional democratic procedures could thus be ignored

Always think this, that Jacob Rees Mogg lying down in parliament displays how entitled he feels to be part of the ruling class. Probably since going to that boarding school which kept his clique so detached from the reality of the country. https://t.co/V9z2l8jj99

Johnson’s just expelled 21 MPs, which gives Rees-Mogg even more room to spread out . I gather he’s bringing his children with him this evening for a sleepover. https://t.co/4gJ59at5sj

Torrents of creative fits flooded social media, and some photoshopped Jacob Rees-Mogg’s facial expression onto a number of pieces of art and TV series snapshots, linking the underlying plot to what is going on in Parliament:

The Death of Any Sort of Credibility, by Petulance#JacobReesMogg#ReesMogg pic.twitter.com/fkmUuoTZp1

Ok so this was my favourite Jacob Rees Mogg lying down Photoshop. Whoever made this, excellent work! pic.twitter.com/sR7VVUK8fG

Speaking of backing down ... nothing beats lying down and taking a well-earned nap while you're busy trashing the economy ... pic.twitter.com/3XY5wZYztl

Jacob Rees Mogg lying down and relaxing in his natural habitat. pic.twitter.com/HbEkpaUCOf

I’m sorry you had to see this but, honestly, you know damn well it made you laugh n you’ll now happily want to inflict this on others too with a quick RT 😂😂😂😂 #JacobReesMogg pic.twitter.com/hAT1ryeqlL

UK lawmakers demanded on Tuesday that they take full control of the urgent parliamentary agenda after opposition MPs prepared a bill that would block a no-deal EU exit, which is slated for 31 October, by delaying the Brexit date. Johnson, in his turn, earlier threatened with a general election if the bill was passed – a move that is not certain to be okayed by Labour, although Jeremy Corbyn has been baying for it.

Earlier on Tuesday, during the crucial vote in Parliament, one Tory MP, Phillip Lee rebelled in the middle of Johnson’s fiery speech, defecting to the Lib Dems, meaning that the Tories no longer hold a majority in the legislative body.