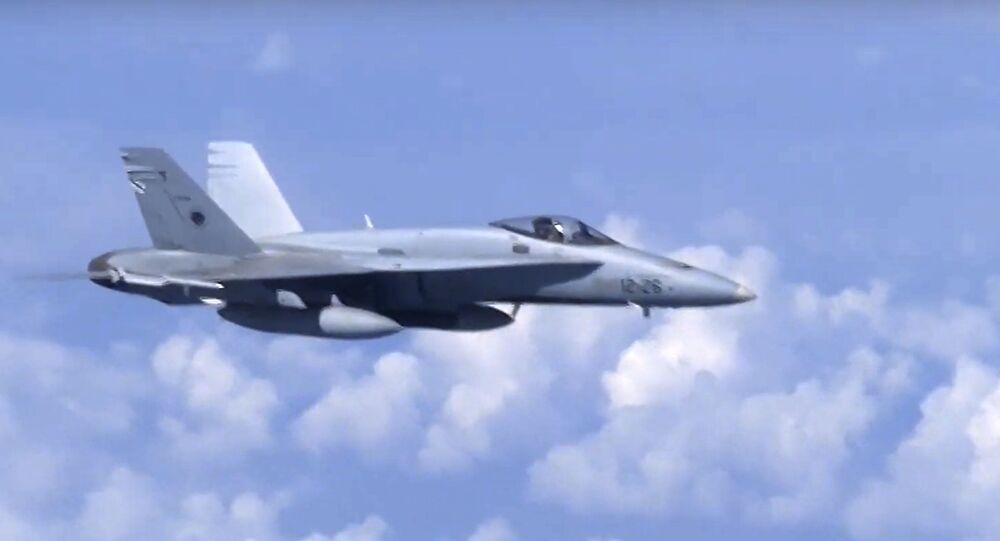 A NATO fighter jet attempted to approach Russian Defence Minister Sergei Shoigu's aircraft as it was flying over neutral waters in the Baltic Sea, the Russian military said in a Tuesday statement.

Readers of the Spanish newspaper, El Confidencial, have condemned the actions of a NATO F-18 Hornet multirole fighter that was chased off by a Su-27 jet after the alliance's aircraft approached Russian Defence Minister Sergei Shoigu's plane over neutral waters in the Baltic Sea.

"An independent Spain would not have military forces on the borders of the new Russian empire. The western borders of the Russian empire are not areas that affect our strategic interests; Russia is not our competitor, rather it is a good consumer of our goods (that now rot in stores because of the EU boycott)", wrote user under alias ITURBIDE.

A fellow user, FRAMONTANO, backed the point of view, penning, "The reality is that Spaniards do not need anything in the Baltic. Russia is not an enemy of ours, nor a friend..."

Another reader, who goes by EU EUEU, added, "It is the most normal thing in neutral waters to protect a plane with a representative of that importance. Wouldn't other countries do the same? What I don't know is what the Spaniards are doing in the Baltic".

The same stance was voiced by user ESTADO_DE_DERECHO, who wrote that "the Soviet Union no longer exists, and Russia does not represent any danger to Europe".

"We are there only to serve the interests of the American empire and not those of Spain. The greatest fear of the United States has always been political and economic cooperation between Russia and the rest of Europe...", the reader added.

Following the Tuesday incident, NATO confirmed in a statement that its warplane had been scrambled to intercept a Russian plane over the Baltic Sea, claiming that the move was made to "identify" the aircraft and that they were not aware as to who was onboard.

"Jets from NATO's Baltic Air Policing mission scrambled to identify the (Russian) aircraft which flew close to Allied airspace. Once the identification of the aircraft had taken place, the NATO jets returned to base", the bloc said.

The Russian Defence Ministry said that the jet approached Shoigu's aircraft and was nudged away by one of the two Su-27 fighters accompanying his plane. The Russian defence minister was reportedly flying from the Russian exclave of Kaliningrad to Moscow when the incident occurred.

According to the newspaper El Pais, the NATO fighter jet belongs to Spain and has been in Lithuania since 2 May as part of an alliance mission.