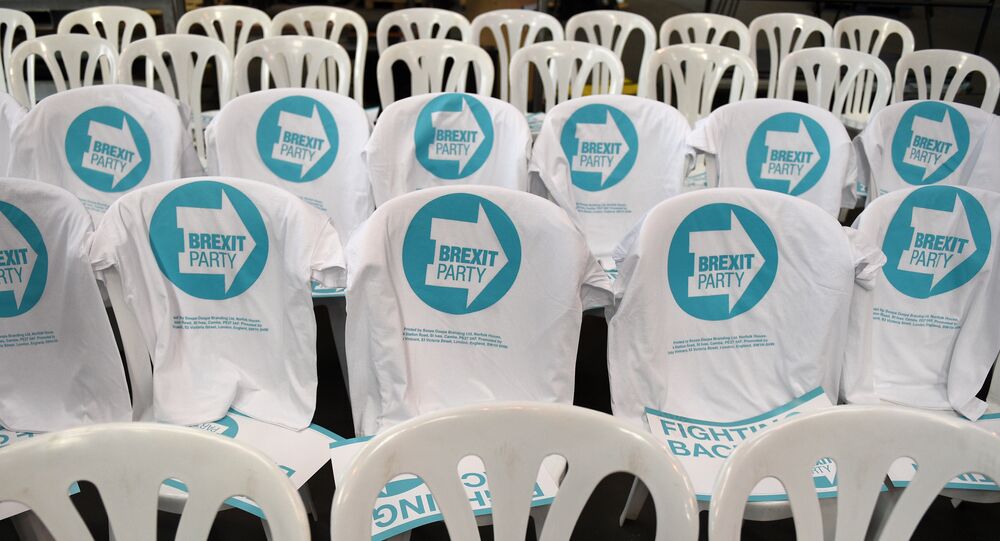 The survey placed the determinedly pro-EU Lib Dems on 24 percent - their best showing since 2010 - while the Brexit Party, which topped the European election, was close behind with 22 percent. The Conservatives and Labour were tied on just 19 percent.

Nigel Farage has claimed a bombshell poll showing the Liberal Democrats top has underplayed the Brexit Party surge, as his party was "hidden" from voters in the shock YouGov survey which put it in second place nationally.

Farage dismissed the results as skewed against his party, as those surveyed were initially asked to choose between the Tories, Labour, Lib Dems, SNP, Plaid Cymru and 'other'. Only if they chose 'other' were they offered the opportunity to opt for Brexit Party.

You Gov have released a poll showing the Lib Dems top in the country, with @brexitparty_uk second. They did not have the BP option on the list and we were hidden in ‘others’. Looks like an establishment attempt to suppress the truth. #FakePolling

​However, while the controversial Brexiteer suggested it was "an establishment attempt to suppress the truth", YouGov research director Anthony Wells has claimed the system is in fact more accurate, even if it "may seem unfair to some people" and has "often been a source of complaint from supporters of smaller parties".

"In the past, prompting for smaller parties has tended to overstate their support when compared to actual elections, and the two-stage approach to prompting has produced more accurate results. However, there comes a point when a small party becomes a big party, when they should be included in the main prompt. This can be a difficult decision, and one that YouGov takes time and care to call correctly, thoroughly testing any changes before they go ahead," he said.

If polling companies do not consider winning a national election enough reason to prompt for The Brexit Party in Westminster voting intentions, then until that happens we consider their results to be #FakePolling. https://t.co/O85ubJRJm0

​Wells added the pollster overstated support for the Brexit Party prior to the European parliament elections, putting them at 37 percent compared to the 31.6 percent they actually achieved.

"Over the next few weeks, we will also be looking at the possible causes of that overstatement, and whether there was something to do with turnout, undecided voters or our weighting or sampling scheme that led to us having too many Brexit voters in our final poll.

As ever, our main consideration will be what is most likely to produce the most accurate results, not what would help one party or another, and we will continue to keep our methods under constant review," he concluded.

In another commentary posted on his personal ‘UK Polling Report' blog, Wells said the poll figures were "obviously startling…unprecedented even".

© AP Photo / Matt Dunham
UK Liberal Democrats Lead Voting Intention Poll, Conservatives on 3rd Place
"There are historical examples of third parties taking the lead (Cleggmania, for example, or the early successes of the SDP-Liberal Alliance), but I don't think there are any when the Conservatives and Labour were both pushed out of the top two. However, even leaving aside the traditional warning this is ‘just one poll', this is one poll conducted in the immediate aftermath of the European elections. Part of what we are seeing is a boost for the Liberal Democrats and Brexit party from doing well in the Euros, getting lots of media coverage and looking like winners," he stated.

Such a boost would be expected to "fade in time" typically, and as a potentially lengthy Conservative leadership election and elevation of a new Prime Minister impends, the media agenda is likely to move back towards Labour and the Conservatives, and he'd "be surprised if we didn't seem one or other of them move back into the lead".