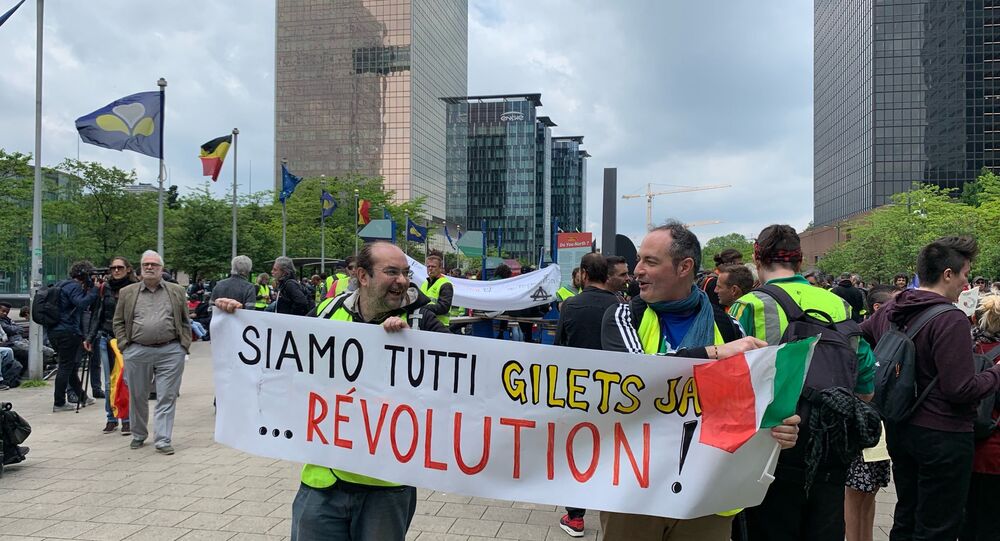 On Thursday, European parliamentary elections commenced in some European states, and on Sunday, the final day of voting across the EU, remaining countries are heading to the polls.

BRUSSELS (Sputnik) — Belgian police made arrests and engaged in small scuffles with yellow vest protesters who gathered in the center of Brussels for an unauthorized rally, local media reported on Sunday.

A call for the Sunday demonstration has been circulating for weeks on social media, La Derniere Heure newspaper said. A few hundred yellow vest activists followed the call, but the event was not authorized.

Earlier in the day, protesters started vandalizing street furniture and police had to intervene. Photos on social media show protesters engaging in scuffles with officers. Several protesters were reportedly arrested following the scuffles.

Later on Sunday, Ilse Van de Keere, the spokeswoman for the Brussels-Ixelles police zone, said that about 20 people were arrested following the scuffles in the Belgian capital. These people threw projectiles at the headquarters of the Socialist Party.

Yellow Vest rallies started in France in mid-November over planned fuel tax hikes. While the French government has abandoned its plans to raise fuel taxes and has introduced other measures to improve the country's socioeconomic situation, protesters continue to take to the streets across France every weekend to express their discontent with the government's policies.

The rallies then quickly spread to other European cities, including Brussels. The protests often resulted in damage and clashes between police and activists.