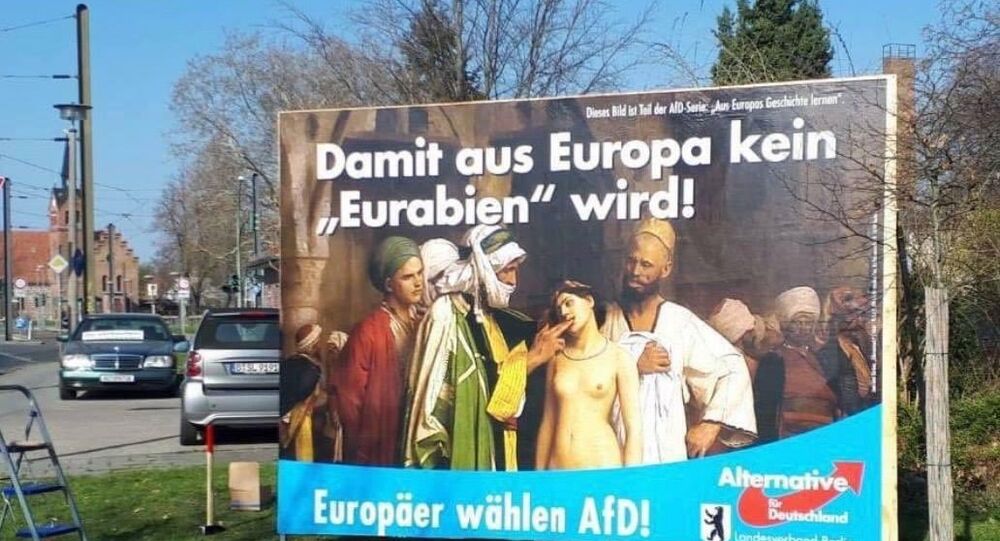 An essay published by the Middle East Forum, a pro-Israel think tank, claims the AfD Party campaign’s use of a 19th-century painting “The Slave Market”, depicting bearded Muslim slave traders bargaining over a naked white woman “echoes reality,” reports The Times of Israel.

On Friday, the Forum shared a paper by Raymond Ibrahim defending the AfD’s message and use of the painting.

Ibrahim wrote in PJ Media that the painting “echoes reality” of the “insatiable demand for fair women” among Muslim slavers over the centuries.

“African and Middle Eastern Muslims have long targeted European women — so much so as to have enslaved millions of them over the centuries,” wrote Ibrahim, a Judith Friedman Rosen fellow at the Middle East Forum, citing his own book, “Sword and Scimitar: Fourteen Centuries of War between Islam and the West.”

“In short, outrage at the Alternative for Germany’s use of the ‘Slave Market’ painting is just another attempt to suppress the truth concerning Muslim/Western history — especially in its glaring continuity with the present,” Ibrahim wrote.

“For the essence of that painting — Muslim men pawing at and sexually preying on fair women — has reached alarming levels all throughout Western Europe, especially Germany.”

Ibrahim said he believes Muslim migration to Europe is an “alien aggression which one is bringing on themselves.”

He suggested “curtailing migration” and accused Muslim migrants of committing a high degree of sexual assault, though claimed no knowledge of actual data on the issue.

Last month, the AfD put up posters in Berlin featuring an 1866 painting called “Slave Market” ahead of European Parliament elections.

© AP Photo / Virginia Mayo
Leaving the EU is Ultima Ratio for Germany – AfD MEP
The poster was emblazoned with the words: “Europeans vote AfD!” and “So Europe doesn't become Eurabia!”

The owner of the artwork — the Clark Art Institute of Massachusetts — voiced its opposition to the use of the painting:

“We are strongly opposed to the use of this work to advance any political agenda,” Olivier Meslay told The Associated Press in April.

Leaving the EU is Ultima Ratio for Germany – AfD MEP