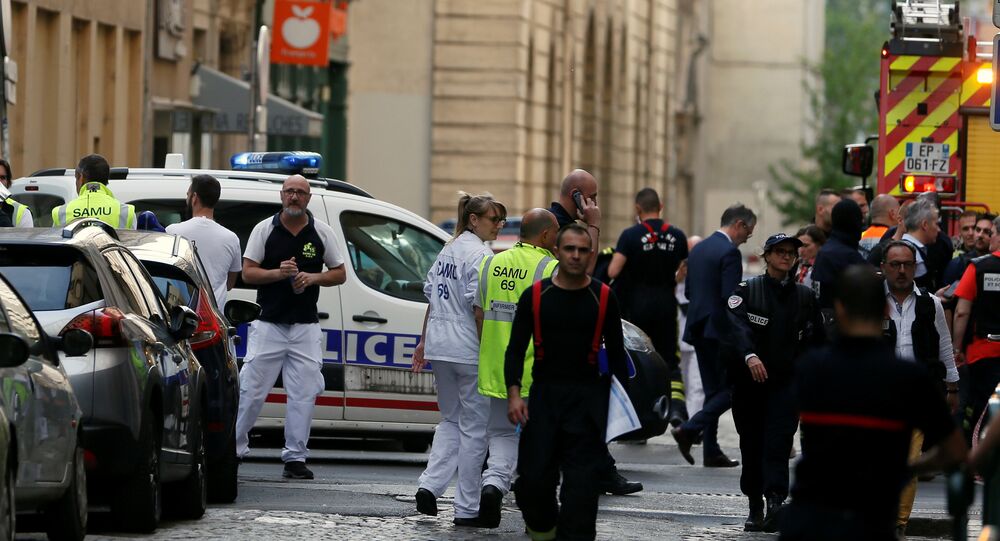 As seen on the CCTV camera screenshot, the suspect entered the scene riding a bicycle, his face covered in a mask he was also wearing sunglasses and a hooded shirt. A police source told Reuters the man left a case in front of the Brioche Doree bakery at Victor Hugo square, which later exploded, showering passers-by with metal bolts.

"He was wearing a dark top and Bermuda shorts," a police officer told reporters. "Municipal cameras would have caught him on his bike."

#Breaking: Just in — First CCTV close up image of the alleged suspect from the IED explosion case in #Lyon in #France. Leaving up to 13 people injured, French police conducting a manhunt for him as we speak. pic.twitter.com/GrYKSxMcEX

​The police said the man in the footage looked "very calm" as he arrived at the scene of the would-be attack.

The explosion of the parcel bomb, which, according to police, contained "screws or bolts," injured 13 people. Eleven of them were rushed to the hospital, but their injuries are said not to be life-threatening.

The French Interior Ministry spokesman confirmed the explosive device was a "homemade nail bomb," according to a report from The Mirror.

The police are now searching for the suspect, and a criminal investigation has been launched into the attack.

A Nude Angela Merkel Will Meet You Up in France's Lyon, Don’t Be Too Late