MOSCOW (Sputnik) - Police Service of Northern Ireland (PSNI) said in a statement on Thursday that four suspects had been arrested under terrorism legislation in connection with the murder of freelance journalist Lyra McKee during the terror attack in the city of Londonderry in Northern Ireland in April.

"Detectives from the PSNI’s Major Investigation Team investigating the murder of Lyra Mckee following violent disorder in Creggan in Derry/Londonderry on 18th April have arrested four people under Terrorism legislation. Aged 15, 18, 38 and 51, the four males were arrested in the city this morning in connection with the violence. They have been taken to the Serious Crime Suite in Musgrave Station, Belfast where they are currently being questioned by detectives," the statement said.

​On April 18, the police said that one woman was killed after shots were fired and gasoline bombs were thrown in Londonderry, and added that it was treating the shooting as a terrorist incident, most likely carried out by the New Irish Republican Army (New IRA) paramilitary organization. Local police later disclosed the name of the killed woman, noting that McKee, 29, worked as a journalist in Belfast. 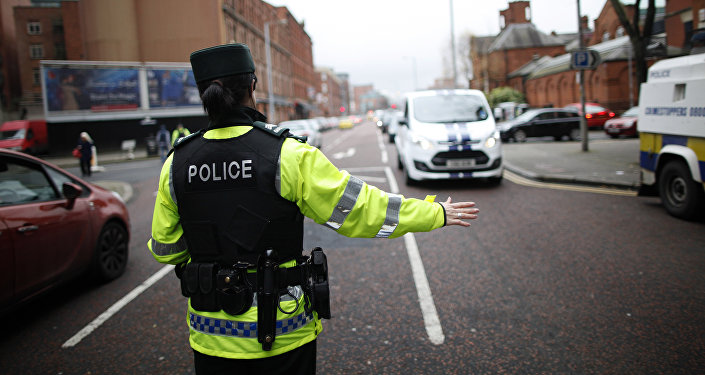 © AP Photo / Peter Morrison
Two Men Arrested in Connection With Murder of Journalist Lyra McKee – N Ireland Police
McKee was regarded as one of the brightest talents in Northern Ireland journalism and was working on an investigation of the disappearance of young boys in North Belfast suspected of being sexually abused and murdered during the so-called Troubles in North Belfast nearly 40 years ago.

New IRA later claimed responsibility for the murder of McKee.

The New IRA is a paramilitary organization protesting the 1998 Good Friday Agreement that put an end to nearly 3 decades of violance and terrorist attacks in Northern Ireland. Over the past few years, the New IRA has carried out several terrorist attacks in the region. In particular, its militants attempted to blow up a police car on 22 February, 2017 in Londonderry.