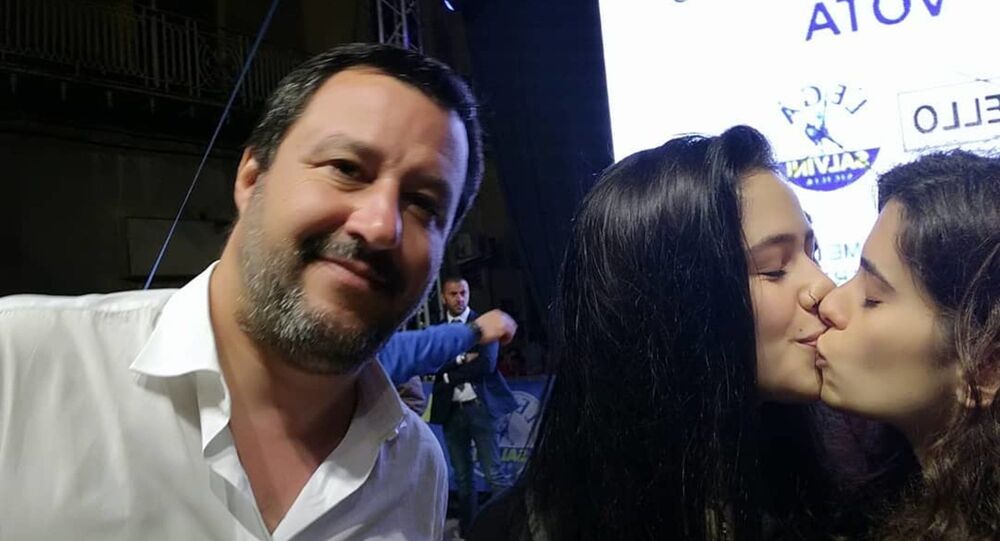 Two kissing girls have photobombed Matteo Salvini in protest against last month's Verona conference that drew the ire of the LGBT+ community.

Matilde Rizzo, 19, together with her friend Gaia Parisi pulled off their stunt at an event in the Sicilian town of Caltanissetta, where Salvini was attending to support his fellow party member's mayoral bid.

READ MORE: Salvini on Time's 100 List: From City Councillor to Leader of Eurosceptics

Matilde Rizzo published the photo of the kiss, which immediately went viral, on her Instagram account, tagging the politician and writing "Hello friend" in the caption.

The girls said they hadn't planned to photobomb the head of government, and the idea came up after he invited those present to take a selfie with him.

"We queued up with Gaia because it seemed right to send out a message on Liberation Day", Matilde told Italian newspaper Repubblica. She was referring to 25 April 1945, the day the Allied troops liberated the country from fascism. "We are just friends, but the kiss was a beautiful message", she added.

"We made a provocative instinctive gesture, not at all premeditated", Gaia Parisi said in an interview with Euronews. "On stage, Salvini did not expect us to take a picture like this. When we kissed, an agent I think, separated us sharply and Salvini then told us 'I wish you luck' so we took off thanking him ironically".

Salvini himself posted the selfie photobomb on Twitter with a caption "Best wishes, peace and all good, sisters!" A second photo shows a hand of an apparent security agent trying to separate the two activists.

The girls have accused Salvini of limiting freedom of expression in Italy, including sexual freedom. In late March, the minister gave a keynote speech at the World Congress of Families in Verona that was backed by his governing right-wing League party.

Some rights groups have chastised the event as "anti-abortion" and "anti-gay". Tens of thousands of LGBT and feminist protesters took to the streets of Verona during the event, marching in support of abortion, women's rights and same-sex unions. Although Salvini in his speech pledged not to change the country's abortion law, he said Italy needed to reverse its declining population.