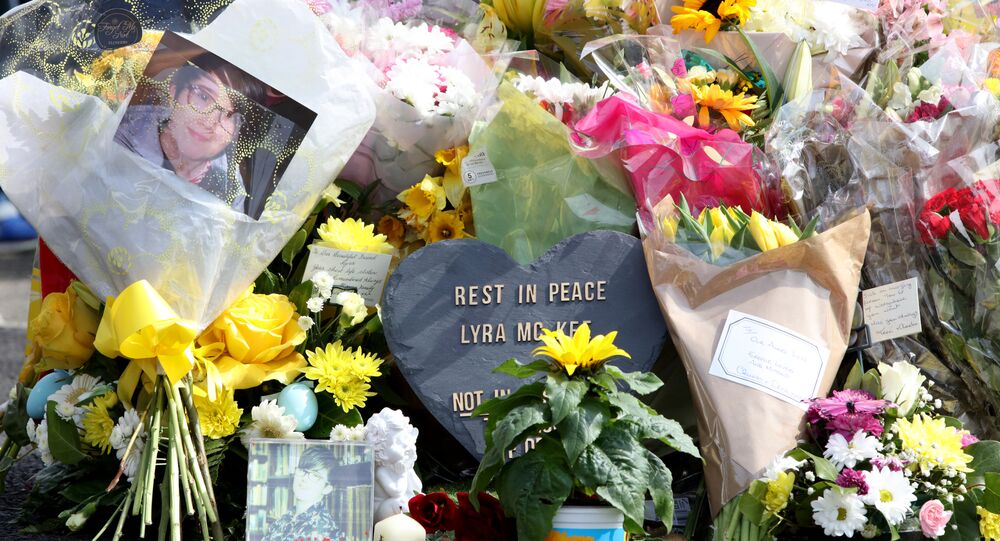 The killing of journalist Lyra McKee during a night of rioting in Derry, Northern Ireland on Thursday is being treated as a “terrorist incident” by local police who suspect that the New IRA was behind the shooting.

Police and party leaders in Northern Ireland have urged for calm and peace after two men were arrested over the shooting death of journalist Lyra McKee during riots sparked by police raids in the Creggan area of Derry on Thursday night.

“Lyra’s murder was an attack on all the people of this community, an attack on the peace and on the democratic processes.  It was a pointless and futile act to destroy the progress made over the last 20 years, which has the overwhelming support of people everywhere. This is a time for calm heads”, the cross-party statement said.

On Saturday, police arrested two suspects, aged 18 and 19, in connection with McKee’s murder, who are alleged to be members of a local republican revolutionary paramilitary organisation, the New IRA.

© AP Photo / Peter Morrison
Woman Killed in 'Terrorist Incident' Amid Violence in Northern Ireland's Derry
The tragic incident has sparked concerns over the stability of a 20-year-old peace deal signed between the British and Irish governments, and several political parties in Northern Ireland on how the latter should be governed.

According to Reuters, politicians in Northern Ireland have warned that Britain’s plan to divorce from the EU could undermine the deal and that a hard Irish-Northern Irish border would become a target for militants.

While Irish Prime Minister Leo Varadkar emphasised that there’s no place for violence in Ireland or Northern Ireland these days, Irish deputy Premier Simon Coveney has specifically called to preserve the peace:

“I call on those intent on violence and disturbances to stop. As we mark the 21st anniversary of the Good Friday Agreement, we are reminded that the vast majority of people of this island voted overwhelmingly for peace and reconciliation and an end to violence. There can be no going back to those awful days”, Coveney said.

EU chief Brexit negotiator Michel Barnier, in the meantime, has pointed out that McKee’s killing was a “reminder of how fragile peace still is” in Northern Ireland, and stressed that “we must all work to preserve the achievements of the Good Friday Agreement”.

On Thursday night, police in Northern Ireland reported that one woman had been killed after shots were fired during riots following a police raid in the Creggan Estate to search for guns and explosives. Officers stated that the weapons were being stored for planned attacks over the Easter weekend.

© AFP 2020 / Jess LOWE / JESS LOWE PHOTOGRAPHY
UK's May: Death of Journalist in Shooting in N Ireland 'Shocking, Senseless'
Following the raid, police vehicles were attacked by masked rioters, with law enforcement officers saying that up to 50 petrol bombs had been thrown. Two cars were hijacked and set on fire, with some 100 people gathering in the streets when the shots were fired.

The authorities said that they are treating McKee’s killing as a “terrorist incident”, and, most likely, the Irish Republican Army (New IRA), a local republican revolutionary paramilitary organisation, was responsible for her death.

UK Prime Minister Theresa May has expressed her condolences to McKee’s family and loved ones and said that the suspected terrorist incident was “shocking”.

"The death of Lyra McKee in last night's suspected terrorist incident in Londonderry is shocking and truly senseless. My deepest condolences go to her family, friends and colleagues. She was a journalist who died doing her job with great courage." – PM @theresa_may

The New IRA emerged in 2012 after a merger of several groups opposed to the 1998 peace pact, known as the Good Friday Agreement that put an end to nearly 30 years of violence and terrorist attacks in Northern Ireland. It has been active in Derry and has carried out several attacks in the region over the past few years.

UK's May: Death of Journalist in Shooting in N Ireland 'Shocking, Senseless'