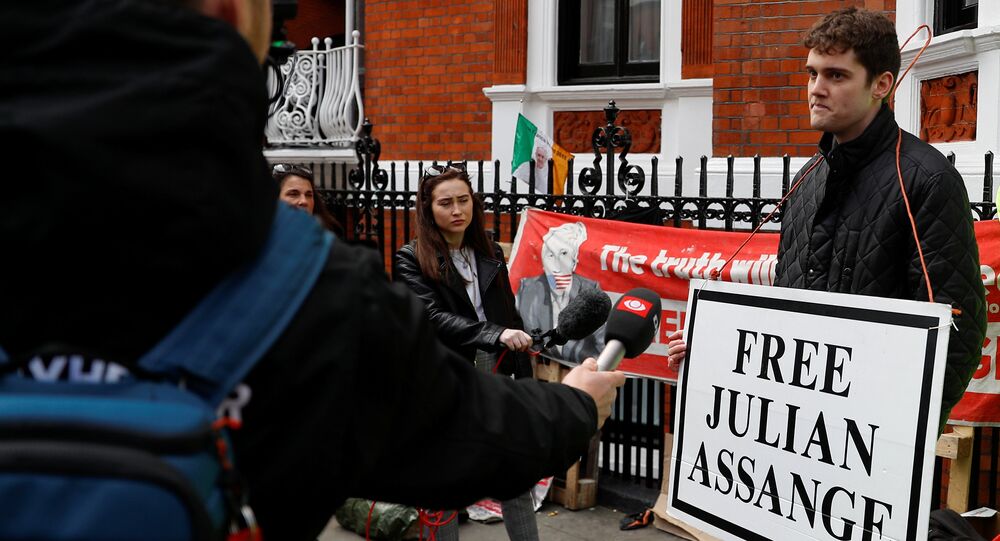 LONDON (Sputnik) - Protesters, who gathered outside the Westminster Magistrates' Court in London for a demonstration against the arrest of WikiLeaks founder Julian Assange and his possible extradition to the United States, told Sputnik that the case was a clear violation of human rights.

However, it was unlikely to gain much traction in mainstream media outlets because the "information war is lost", demonstrators suggested.

Assange was detained by UK law enforcement officers on Thursday after being dragged out of the Ecuadorian embassy in London, where he stayed for seven years. He was subsequently brought to the Westminster Magistrates' Court where he was found guilty of violating bail conditions back in 2012 when he entered the embassy. The UK police subsequently said the arrest was carried out at the request of the United States where Assange faces charges of computer hacking.

On Thursday, dozens of supporters of Assange gathered near the Westminster Magistrates' Court. The crowd chanted "free Assange". The campaigners held signs with slogans, calling for the freedom of speech and safety for the WikiLeaks founder.

Mark Records, one of the demonstrators, recalled that the story developing around Assange was deep-rooted in the US intervention in Iraq and the subsequent release of classified information on the war by WikiLeaks with the help of whistleblower Chelsea Manning.

"I felt then there was an enormous injustice taking place and western countries were moving dangerously away from following international law. I'm not saying other countries are entirely right, I'm sure human rights abuses go on in China, maybe Russia and perhaps Venezuela, but I'm pretty sure this [Assange's case] is a violation of human rights", Records told Sputnik.

© AP Photo / Carolyn Kaster
'I Know Nothing': Trump Distances Himself from WikiLeaks After Assange Arrest
Records insisted he had the right to receive information when it comes to the United Kingdom’s involvement in international conflicts, particularly those in the Middle East.

"I mean there's Yemen where we supply the warplanes, the fuel for the warplanes, we supply the bombs […] We did Libya, we did Iraq and the US is threatening Iran at the moment. Of course, it's ongoing in Syria where we've actually bombed Syria illegally where there looked like particularly made-up evidence of gas attacks. But that was the evidence that was used to go in and bomb another country. It's preposterous", Records argued.

He suggested that if Moscow decided it did not like some London’s moves, like the extradition of Assange to the United States, and chose "to bomb the Isle of Wight, well, it would be an absolute outrage".

"Yet somehow the West behaves like this and the western media takes that as being normal. It’s been normalized, and that's a real danger. I think people believe it’s normal now and there's nothing we can do", Records pointed out.

Ross, who refused to give his surname, suggested that the lack of coverage of the situation around Assange by mainstream media outlets had been motivated by their unwillingness to attract attention to the case.

© CC0
Assange Could Face Secret US Trial Where Fabricated Evidence May Be Introduced - Whistleblower
"There's power in numbers and I think that's part of the reason there's not much mainstream media attention for this. I mean obviously there's mainstream coverage of this today, but there's money in this for the big guys. But they won't be taking too many detailed words from the supporters of Assange", he told Sputnik.

Ross also recalled that there had been not much response from politicians on the situation apart from "a few slimy words" from UK Foreign Secretary Jeremy Hunt, who said Assange was "no hero".

"The only journalists that have been diligently covering the embassy constantly are the Ruptly live feed from what I can tell. I mean they've been out there 24/7 for the last week or so, so I've got no criticism for them", Ross noted.

Ivan, who also said he preferred to use just his first name, said he was disappointed by the fact there were not so many protesters in front of the court on Thursday as he expected, saying he thought thousands of people would arrive.

Ross said he was following the Assange case on the internet and was supporting it on Twitter.

"But now I figured it's time to put my money where my feet are, if that makes sense […] But I have not been present at embassy protests because, to be honest, I feel afraid. You hear stories of activists being targeted, police surveillance and so on. But today it's a big change. If I don't come out here and show my support in person today, well I never will, will I?" Ross pointed out.

© REUTERS / Peter Nicholls
Media’s Betrayal of Assange Leaves Them with ‘Blood on Their Hands’
Mark Record, in his turn, said he was at work when the learned about the arrest and said to his boss he had to leave in order to get to the demonstration near the court.

"It had been already reported, through Wikileaks, that he [Assange] heard there was likely to be some sort of movement on it [expelling him from the embassy]. I thought that because he mentioned it and there were people outside the embassy they'd just postpone. They could wait a month or two, he's been there seven or eight years, so they could wait a month or two until it dies down and go and do it", Records suggested.

Ivan recalled that UK Prime Minister Theresa May announced the arrest of Assange with "such jubilation", and expressed his concern about opposition leader Jeremy Corbyn being "demonized".

He suggested that the United Kingdom and the European Union would end up "like the US with the deep state underneath".