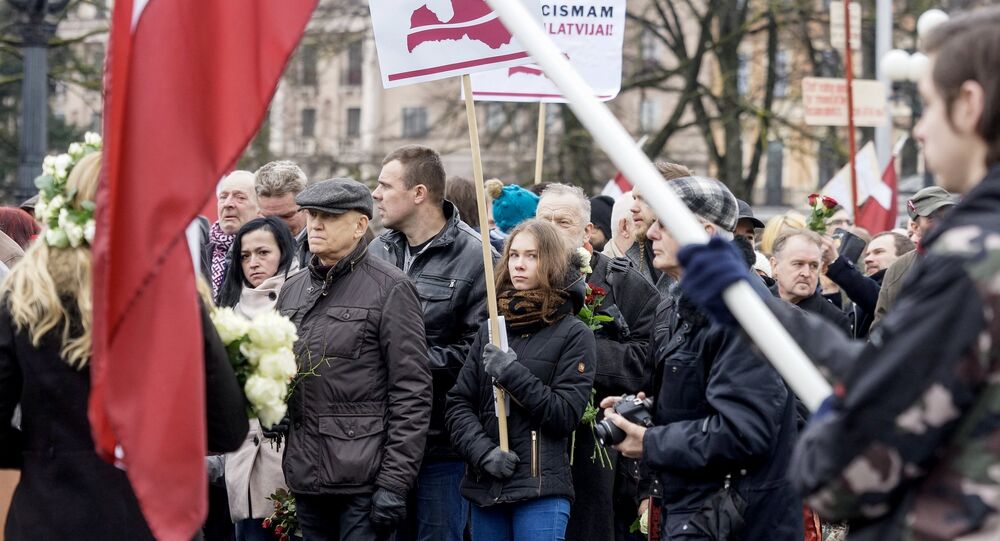 RIGA (Sputnik) - Over 1,000 people took part in the march of Waffen-SS legionnaires and their supporters in the Latvian capital of Riga on Saturday, a Sputnik correspondent reported.

While just several hundreds of people usually take part in these marches, this year the event gathered over 1,000 participants, according to the estimates of the local police.

Protesters, holding national flags of Latvia, Lithuania and Estonia, marched from St. John's Church to the Freedom Square, via the Kalku street. Upon reaching the square, they laid flowers at the Freedom Monument.

A group of anti-fascists, headed by Tatiana Zdanoka, the co-chair of the Latvian Russian Union, arrived at the Freedom Square as well. They were holding posters saying "They fought on Hitler's side".

Security measures have been increased in Riga on Saturday. Border control has been intensified, as the Latvian State Border Guard seeks to prevent entrance of foreign nationalists who could take part in rallies.

Marches commemorating deceased members of the Latvian Legion of the Waffen-SS are held annually in Riga on 16 March.

The Waffen-SS was founded as an armed wing of the Nazi party. It fought alongside the German regular army in World War Two and provided guards for concentration camps in Germany and abroad. It was ruled a criminal organization at post-war Nuremberg trials.