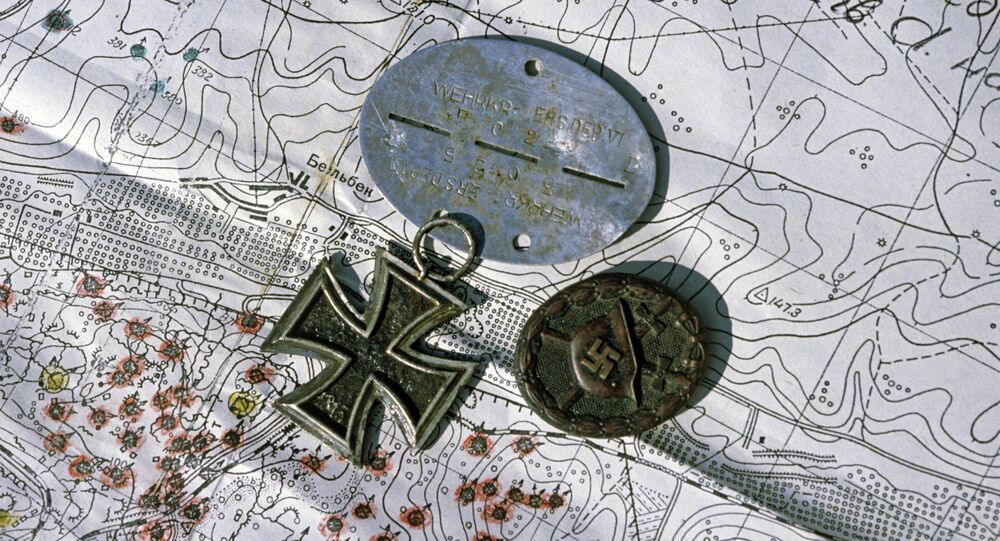 Earlier, treasure seekers around the world were intrigued following media reports that the diary of an SS officer said to contain clues about the location of millions of dollars' worth of Nazi loot was discovered after being hidden away in a Freemasons lodge in Germany.

The 'diary of SS Officer Egon Ollenhauer' said to contain details of a special operation approved by Adolf Hitler to hide some 260 truckloads of gold bars, coins, valuables and priceless artwork at nearly a dozen discreet locations across Poland in the closing months of World War 2 simply isn't credible, Russian military historian Konstantin Zalessky has said.

© AP Photo / Mike Groll, File
German Freemasons REVEAL Path to Nazi WWII Gold Hidden By SS - Report
According to the historian, who has written over a dozen books on Nazi Germany, there were simply too many inconsistencies with the story.

"The document itself wasn't published; several photographs of its pages were provided. We need to be careful with such things. The people who submitted these papers say that there had been verified in five examinations, but we don't know who conducted them," Zalessky said, speaking to Russia's Zvezda newspaper.

The historian drew attention to the shroud of mystery hanging over how the diary found its way to the Freemasons lodge, and just who this Officer Egon Ollenhauer really is. According to the historian, his name could not be found in any historical documents.

"Who is this Egon Ollenhauser?…If he was a standartenfuhrer, as claimed, why are is there no information about him in the documents of the SS? If he is a sturmbannfuhrer, it's another matter, but his name is not to be found in any lists of sturmbannfuhrers for the year 1943 either. Who is this man? There is no information about his biography, and he can't be found based on his previous activities. No one with such a name was ever listed in the ranks of the SS," Zalessky said.

© AP Photo /
Ex-SS Belgian Collaborators Still Receive Pensions From Hitler Decree - Reports
Due to this and other reasons, the historian noted that the story leaves a lot of questions and doubts.

For example, "the diary lists a massive 260 truckloads' worth of treasures. This begs the question – how many people were required to operate these trucks, and how many people took part in this operation? A minimum of 260, plus those who did the loading. That means more over a thousand people" were probably involved in the operation, Zalesky stressed, meaning keeping it a secret would be next to impossible.

News of the newly found SS officer's diary spread like wildfire online, with one of the secret stashes of treasures said to contain some 28 tonnes of gold, with another said to contain 47 priceless works of art stolen from collections in France, including works by Botticelli, Rubens, Monet and Rembrant, among others. A third is said to house religious artefacts stolen from around the world.

US Marine Under Investigation After Posting Pro-Nazi Tweets (PHOTO)