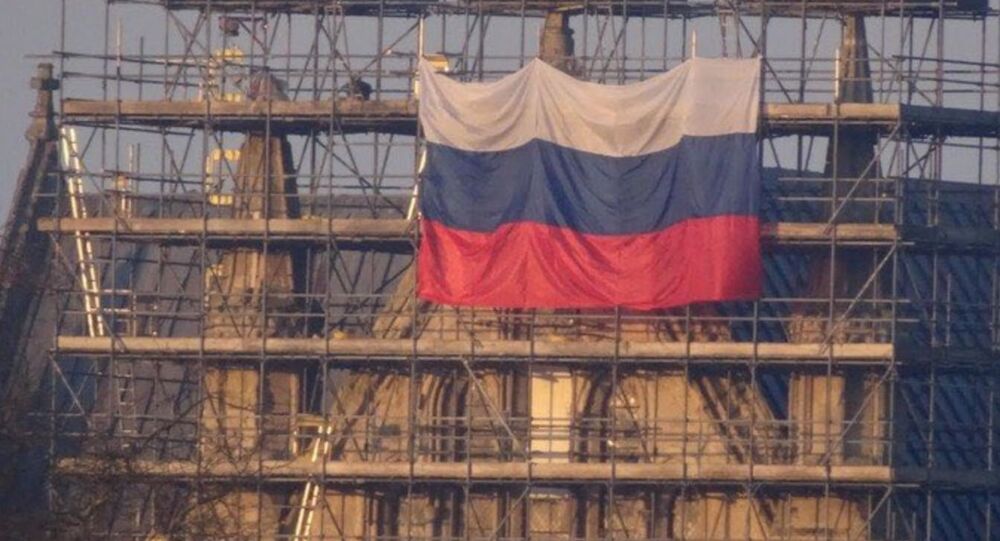 An unknown person has hung the Russian flag on the Cathedral Church of the Blessed Virgin Mary, an Anglican cathedral in Salisbury, England, local radio station Spire FM reported.

According to the radio station, the flag was spotted early in the morning on 17 February. It is presumed that someone climbed onto the scaffolding installed on the building of the cathedral to hang the flag during the night.

"I think that I could see the person who hung it. When I passed by the cathedral at about 6:30 p.m. on my way home from work", a local resident said, as quoted by the radio station.

Social media users have posted numerous photos of the cathedral with the Russian flag on it.

So the Russians are back… Russian flag on display from the scaffolding on the Cathedral 😲#salisbury #russia #salisburyjuniorparkrun pic.twitter.com/o1shsUe7gj

Member of the British Parliament for Salisbury John Glen has also reacted to the incident.

Thankfully it has been removed now — what a stupid stunt — mocking the serious events sadly experienced in Salisbury last year https://t.co/eDUBFhuOT4

The Salisbury Cathedral has drawn a lot of attention due to events last year connected with the poisoning of the Skripals, when both the father, Sergei, and daughter, Yulia, were found unconscious on a bench at a shopping centre in the town on 4 March 2018. London promptly claimed that they had been poisoned with a military-grade nerve agent and accused Moscow of staging the attack.

It later named Russian nationals Alexander Petrov and Ruslan Boshirov as suspects in the case, accusing them of working for Russian intelligence. The Russian citizens, in turn, claimed that they visited Salisbury only to look at the cathedral, and considered themselves to be the victims of an unfortunate set of circumstances.

Moscow has denied any role in the suspected murder attempt, stressing that no proof has been presented by London.