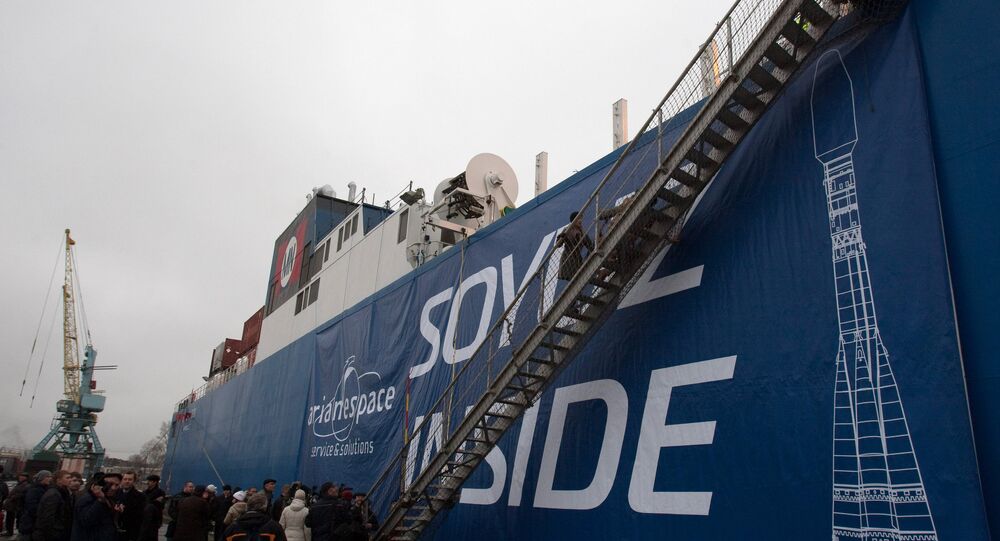 MOSCOW (Sputnik) - Arianespace has not accepted the offer by the Russian Lavochkin Research and Production Association to "patch up" the rupture in the pipeline that supplies helium to fuel tanks of the Fregat booster on the Soyuz-ST carrier rocket at the space center, a source in the rocket and space industry told Sputnik on Monday.

The booster is scheduled to put the first test satellites of the UK OneWeb satellite constellation into orbit. Last week, sources in Russia's space industry told Sputnik that the seam rupture in a pipeline (that supplies helium to fuel tanks) of the Fregat booster on the Soyuz-ST carrier rocket had been detected during pre-launch preparations.

"Arianespace company has not accepted the offer by the Russian Lavochkin Research and Production Association, which is the producer of the Fregat booster, to repair the unsealed welding seam by putting a bandage on it. We are currently negotiating the possibility to carry out the welding works at the space center, but Arianespace opposes this idea as it believes that repairs should be carried out at the factory", the source said.

The source explained that European experts were in doubt about the possibility to carry out the repair works at the space center, as they believed that this might do damage to the reliability of the booster.

© RIA Novosti . Alexei Danichev
Soyuz-ST-B Rocket With O3b Telecom Satellites Takes Off From Kourou Spaceport
The source added that he did not rule out that the Russian manufacturer and Arianespace would not reach a compromise. In this case, it will be necessary to return Fregat to Russia for repair, which means that the "cracked" Fregat booster will have to be replaced with a new one.

According to another Sputnik source, the launch of OneWeb satellites, which is scheduled for February 20, has been postponed to 27 February.

OneWeb plans to create a constellation of satellites that will provide broadband Internet access to users around the world fully covering the Earth’s surface. OneWeb's investors include Virgin Group, SoftBank, Airbus, Qualcomm and Coca-Cola.

The Soyuz-ST is a version of the three-stage Soyuz-2 rocket with a Fregat booster, adapted for launches in high heat and humidity climate prevalent in Kourou.