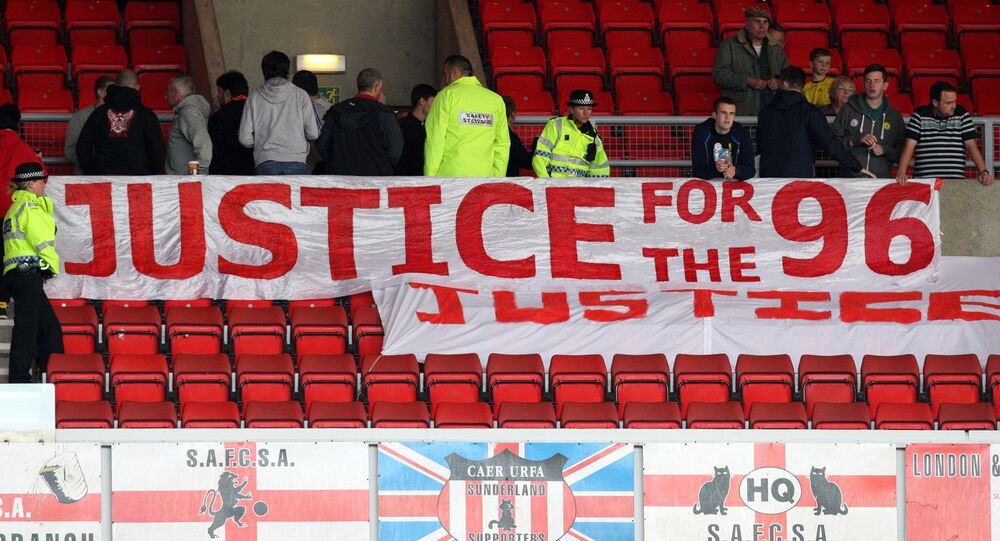 In April 1989 over-crowding at an FA Cup semi-final match in Sheffield led to the deaths of 95 Liverpool football supporters.

David Duckenfield, who was the South Yorkshire Police commander who had the overall responsibility for safety at Hillsborough stadium on the day of the match between Liverpool and Nottingham Forest.

He denies causing the manslaughter, by negligence, of 95 Liverpool fans who were crushed to death at the Leppings Lane end of the ground moments after the game kicked off.

In the 1980s FA Cup semi-finals were played at neutral venues and the home of Sheffield Wednesday Football Club was chosen as it was halfway between Liverpool and Nottingham.

© AP Photo /
David Duckenfield, the police commander at Hillsborough, who has gone on trial for manslaughter by negligence

Richard Matthews QC, prosecuting, said Duckenfield's "extraordinarily bad failures" contributed directly to the deaths of 96 fans, although he is only charged with the death of 95 because one — Tony Bland — died four years after the game.

Under the law at the time, there could be no prosecution for the death of Mr. Bland, because he died more than a year and a day after his injuries were caused.

Mr. Matthews said the victims included 10-year-old Jon-Paul Gilhooley, who had been brought to the game by his father as a special treat.

© AP Photo /
FILE - In this April 15, 1989 file photo police, stewards and supporters tend and care for wounded supporters on the field at Hillsborough Stadium, in Sheffield, England.

"Each of the 96 was a Liverpool FC supporter who had travelled to Sheffield to enjoy the ticket-only FA Cup semi-final," Mr. Matthews told the jury.

"Each was an individual who formed part of what was the anticipated 50,000 crowd of spectators, whose attendance, entry and accommodation at the Hillsborough stadium should have been properly planned for and safely facilitated," said Mr. Matthews.

Among the failures Duckenfield is accused of is failing to delay the kick-off despite difficulties getting the sizeable crowd into the stadium and ordering the opening of the gates at the Leppings Lane end, which caused a surge of bodies onto the already crowded terrace.

Many of those who died were crushed up against the metal fence, which had been erected at pitchside a decade earlier to prevent hooligans coming onto the pitch.

The jury of 12 was picked by Judge Sir Peter Openshaw after 100 potential jurors filled in a questionnaire asking them, among other things, whether they supported Liverpool, Nottingham Forest, Sheffield Wednesday or Liverpool's rivals Everton.

He warned the jurors the trial could last up to four months and told them not to research the disaster on the internet.

The jury heard that on the day of the match 24,000 Liverpool supporters were directed to the Leppings Lane end of the ground — a stadium which was originally built in 1899 — where there was an almost inevitable crush of fans trying to get in before the 3pm kick-off.

Fearing a fatal crush in the street outside the stadium Duckenfield took the decision to open an exit, Gate C, and allow in supporters, some of whom may not even have had tickets.

"David Duckenfield gave no thought to the inevitable consequence of the flood of people through Gate C, nor did he make any attempt to even monitor what was occurring, let alone avert the tragedy," said Mr. Matthews.

Gate C was closed again at 2.58pm but by then it was too late.

Thousands of fans headed down a tunnel towards two terraced pens directly behind the goal, which were already full of supporters.

Duckenfield did not ask the referee to delay the kick-off, said Mr. Matthews, and is also accused of failing to provide "emergency medical attention, particularly attempts at resuscitation" until it was too late.

Hillsborough: Matthews QC: "It is the prosecution's case that [Duckenfield's failures before 3:05pm, incl failing to try and "avert tragedy" after Gate C was opened] amounted to the gross breach of his duty of care… [he] is guilty of the very serious crime of manslaughter."

​The Crown Prosecution Service, announced the decision to prosecute Duckenfield in June 2017, following a fresh inquest into the deaths.

Hillsborough was extensively rebuilt after the disaster when all-seater stadiums were introduced in England.