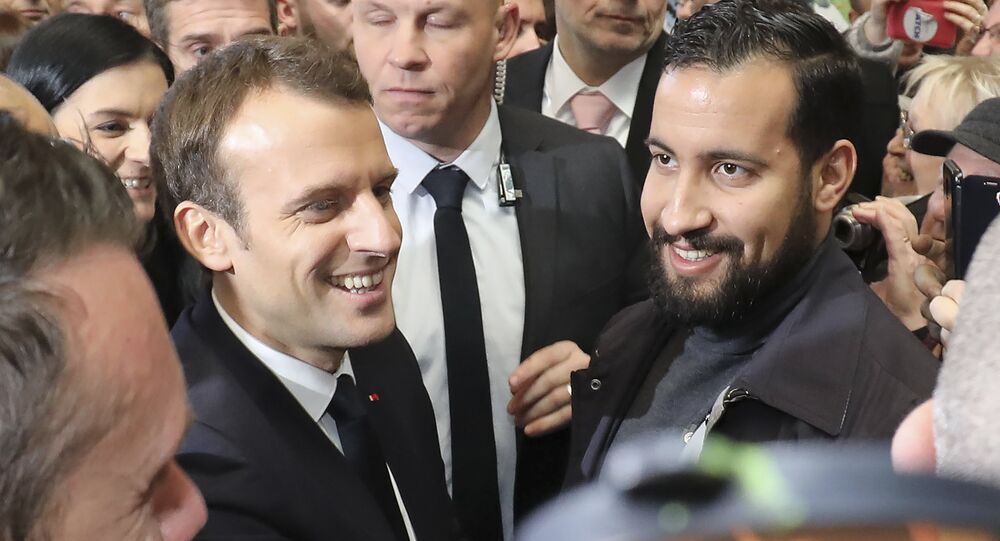 Suspicions that Alexandre Benalla still maintained connections with the French president were fuelled by his trip to Chad on a diplomatic passport just days before Emmanuel Macron’s state visit to the African country.

Alexandre Benalla, the scandal-hit former security advisor to Emmanuel Macron, claims that he kept in touch with the French president even after being sacked for beating a May Day protester, Mediapart reported.

According to Benalla, he used the Telegram messenger to maintain contact with Macron, who himself denied any connections to his former aide after the May incident.

"It will be very hard to deny it because all these exchanges are on my mobile phone”, he said adding that the messages touched upon various topics, including the “yellow vests” and security issues.

Benalla elaborated that this kind of exchange was pursued after his dismissal in July and was interrupted only after Mediapart published information in December that Benalla had continued using diplomatic passports, which previously were issued to him by the Foreign Ministry on orders of the Elysée Palace.

"I am an outsider who means well for the guy [Emmanuel Macron] who trusted him. I could have slammed the door and moved on, but they keep consulting with me, so I keep answering", he said.

Commenting on the use of diplomatic passports, Benalla said that his trip was private, and that it was done only for his comfort. He also promised to return the passports “in the coming days”.

“Perhaps I was wrong to use these passports. But I want to make it clear that I only did it for my personal comfort, to facilitate my passage through airports. I never used them for my business”, he told the Journal du Dimanche.

Benalla also claimed that he had returned the passports to the Elysée in August, but they were handed back to him by a member of Macron’s staff in October.

© AP Photo / Christophe Ena
Benallagate 2.0? Ex Macron Aide Reportedly Visited Chad on Diplomatic Passport
The French Ministry of Foreign Affairs announced that on 26 July, 2018, it had asked Benalla "to surrender the two diplomatic passports in his possession", issued on 20 September, 2017 and 24 May, 2018.

Prosecutors are investigating allegations that Benalla illegally used diplomatic passports, which should have been surrendered after he was sacked in July, to travel to Africa and Israel, Le Monde reported.

Speculation that Benalla and Macron could still maintain contact has re-emerged since French media reported that both visited Chad this month. While Benalla insisted that he travelled to the African country with a “foreign business delegation”, President Macron arrived in Chad on 22 December, and reportedly told his Chadian counterpart Idriss Deby that Benalla was in “no way an unofficial or official intermediary”.

Benalla’s name made world headlines this summer, after a video of him manhandling a May Day protester in Paris while wearing police insignia was unearthed online. He now faces charges of assault, impersonating an officer, and illicitly receiving CCTV footage of the May Day incident, although he has denied any wrongdoing.