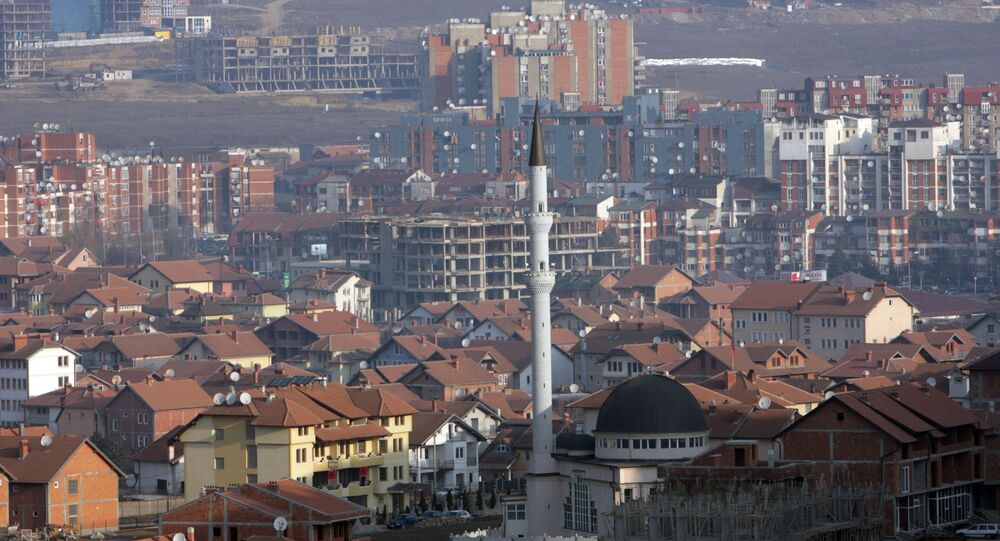 BRUSSELS (Sputnik) – The introduction of high import duties on goods originating from Serbia by the authorities of the partially recognized Republic of Kosovo practically brings local Serbian residents to the brink of a humanitarian catastrophe, Russian envoy to the European Union, Vladimir Chizhov, told Sputnik.

"The problem is not only the creation of the army, but the introduction of 100 percent duties, too. This practically means a humanitarian catastrophe for the remaining Serbian residents of Kosovo, because they have survived mainly due to supplies from Serbia. By the way, the same thing concerns the Republika Srpska as part of Bosnia and Herzegovina," Chizhov said.

© AFP 2020 / ARMEND NIMANI
Kosovo Creates Govt Panel to Work on NATO Accession
Kosovo’s Prime Minister Ramush Haradinaj has said that the tariffs will remain in place "until Belgrade recognizes the independence of Kosovo."

Serbian Prime Minister Ana Brnabic said in December that the country would lose around 43 million euros ($49 million) per month due to the introduction of the tariffs by Kosovo’s authorities.

Meanwhile, Serbian residents in Kosovo have carried out peaceful protests calling on EU authorities to impose retaliatory sanctions against the authorities in Pristina over the import duties introduction.

In mid-December, Kosovar lawmakers passed a number of bills transforming the republic's security forces into a full-fledged army.

"It seems like the Kosovar Albanian leaders have got the bit between their teeth as they have not faced opposition from the European Union and have likely received support from Washington. Now they are pushing hard which can bring grave threats to the stability of the whole Balkan region. They have been supported. And the main thing is they have not been stopped," the Russian envoy noted.

Chizhov suggested that the European Union should have recalled that it played an intermediary role in the Serbian-Kosovar settlement and should have "nailed Pristina to the wall."

© Sputnik / Ruslan Krivobok
Washington Urges Serbia, Kosovo to Lower Tensions - US Diplomat
In November, Kosovo imposed 100-percent import duties on all products originating from Bosnia and Herzegovina and Serbia and banned all goods that were not marked in line with the rules of the self-proclaimed republic, citing the alleged hostile approach of the two countries toward Pristina.

Kosovo proclaimed its independence from Serbia in 2008 and was recognized by over a hundred UN member states. The move was not, however, recognized by Serbia and two permanent members of the UN Security Council, Russia and China, as well as a number of other states.