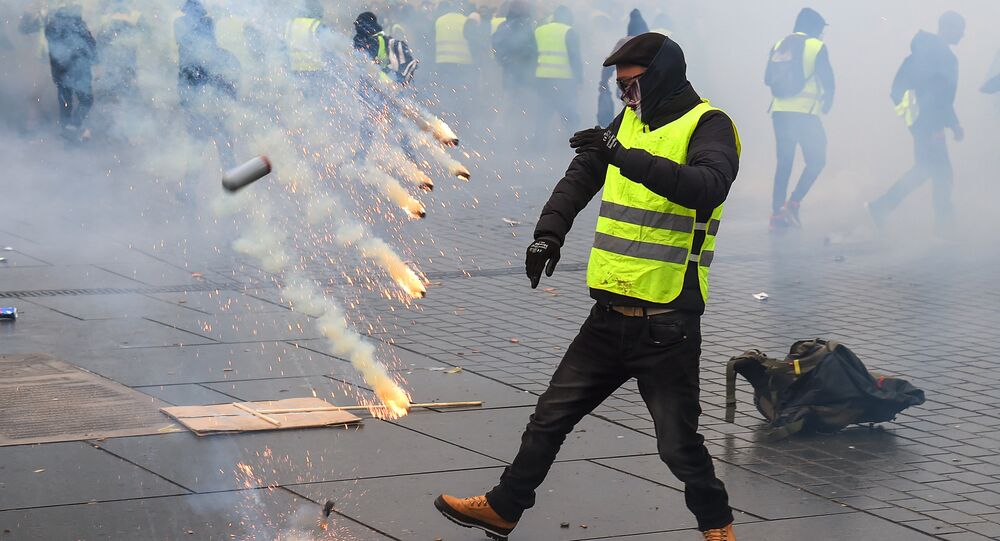 The damages have cost the road operator tens of millions of euros already.

French protesters, commonly referred to as "yellow vests," have occupied highways in France and set fire to toll booths, sparking chaos in the country's transport system just days before the Christmas holidays, according to a report by Reuters.

Vinci Autoroutes, France's largest toll road operator, has reported protesters occupying some 40 sites across its network and damaging some intersections. In particular, damaged intersections were reported in Avignon, Orange, Perpignan and Adage.

© Sputnik / Zhanna Manukyan
French Companies Show Interest in Russia-China Aircraft Project - Civil Aviation Authority
The A50 highway between Marseille and Toulon was closed after the protesters set the toll station ablaze, Vinci reported. Another station at Manosque was also torched.

Some 20 people were arrested Tuesday over the arsons, while four others have been in custody since Saturday, Reuters reports.

"Motorists should take utmost care as they approach toll gates and motorway access ramps due to the presence of numerous pedestrians," Vinci said in a statement.

Several people have died in automobile accidents in recent weeks, mostly at points blocked by groups of demonstrators.

The protesters — called "yellow vests" after the reflective vests they wear — have occupied roads and roundabouts across France since mid-November. The protests were initially sparked by fuel tax increases, but later the demonstrations evolved into a wider backlash against French President Emmanuel Macron's policies.

© Sputnik / Mihail Kutusov
France Sees Prospects for Development of Economic Relations With Russia Despite Sanctions
The protesters have reportedly damaged or burned hundreds of traffic radars, with some 1,600 devices — about half of France's radars — affected.

According to France's interior ministry, minor damage to a radar might cost about 500 euros to repair, while major damage might cost some 200,000 euros. The high margin of fines for damaging radars is set at about 75,000 euros. The interior ministry called for the protesters to refrain from damaging the equipment, noting that even wrapping a radar in plastic or a yellow vest counts as an offence

Vinci estimates the damages from the protests at "several tens of millions" of euros, not including lost revenue form the inoperable toll booths. While the company initially intended to fine motorists who drove through toll roads without paying and were caught on CCTV cameras, it later announced a decision to drop the plan.