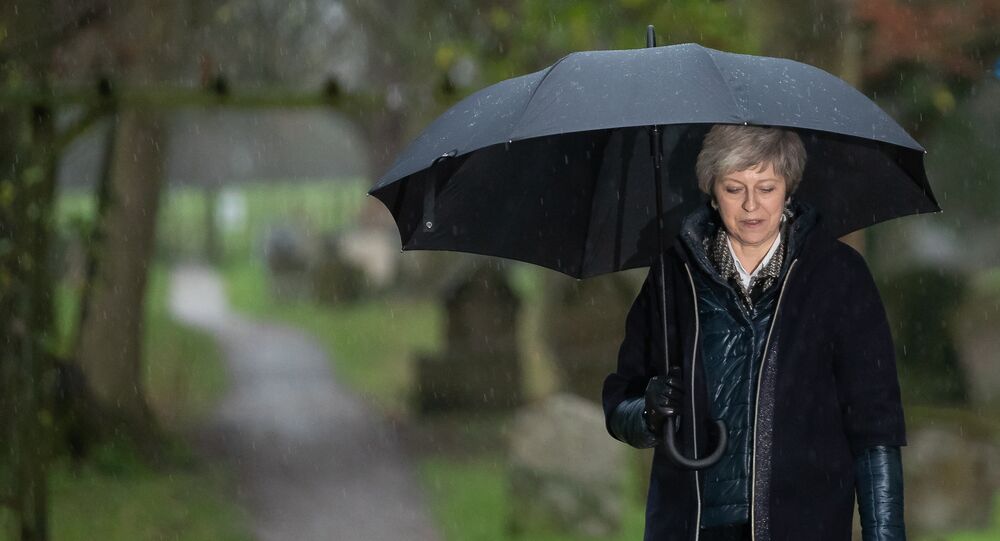 Could May Join List of PMs Who Have Faced Votes of No Confidence in Parliament?

Theresa May has survived a vote of confidence in the Conservative Party, by 200 votes to 117. But with the possibility of a vote of no confidence in Parliament on the horizon, Parliament looks at past UK prime ministers who have struggled to cling on to power.

With the support of only 200 MPs out of 650 in Parliament, Mrs. May appeared to be in a very weak position on Thursday, December 13, as she headed off to the European Union summit in Brussels.

Labour may put forward a vote of no confidence in her in Parliament, which could get the support of some or all of the 117 Tory rebels and her erstwhile allies in the Democratic Unionist Party, who are furious with the Northern Ireland "backstop".

In a bid to win the no confidence vote on Wednesday, December 12, Mrs. May gave MPs in her own party an assurance she would not lead them into the next general election.

So when was the last time a prime minister was in such a weak position?

The Labour Party won a General Election in 1974 under Harold Wilson but he retired two years later, leaving his former Chancellor, James — better known as Jim — Callaghan, in 10 Downing Street.

Wilson had a majority of three in October 1974 but it was whittled away by by-election defeats and the bizarre case of Labour backbencher John Stonehouse, who faked his own death in Florida and fled to Australia to start a new life with his mistress.

By 1977 Labour could only hold on to power by virtue of a confidence and supply agreement with the Liberals, known as the Lib-Lab Pact.

That too collapsed in 1978 and Callaghan hobbled on through the winter, facing growing economic difficulties. A string of strikes led to it being known as the "Winter of Discontent" and it was the final nail in the coffin of Callaghan's government.

On March 28, 1979 a motion of no confidence in Callaghan was tabled in the House of Commons.

Labour MP Sir Alfred Broughton, 76, was on his deathbed.

Callaghan considered bringing him down from Yorkshire in an ambulance but thought it would be bad publicity if he died on the way.

In the end the vote of no confidence was passed by 311 votes to 310, with Broughton one of four abstentions. He died five days later.

Callaghan was forced to go to the country and in May Labour were swept from office by Margaret Thatcher and her resurgent Conservative Party.

Labour would not get back into office for another 18 years.

The Conservative Party's Stanley Baldwin was prime minister three times between the world wars but his shortest stint ended in January 1924.

He became the leader of the Tories in May 1923 after William Bonar Law was diagnosed with terminal cancer but an inconclusive election in December 1923 left the Tories with only a small majority.

Baldwin had been trying to force through new tariffs to protect British manufacturers from cheap imports but he had failed to win a mandate for it and on January 21, 1924, Labour's deputy leader J R Clynes tabled a motion of no confidence.

Labour and Liberal MPs ganged up on the Tories and the motion was carried by 328 to 251.

Baldwin resigned the following day and was replaced as Prime Minister by Ramsay MacDonald — the first-ever Labour prime minister.

But the first ever Labour Party government would only last nine months.

Labour only had 191 MPs compared to 258 Tories and were propped up by the support of 158 Liberals and various other independents.

Despite this precarious position they managed to push through unemployment benefits and a big expansion to municipal housing.

MacDonald also set about trying to settle the question of German reparations from the First World War, which he thought were too harsh.

But in the autumn of 1924 the government foundered over MacDonald's decision not to prosecute the editor of the Workers' Weekly, J R Campbell, on charges of "incitement to mutiny" after the paper published an open letter to soldiers and sailors.

"That the conduct of His Majesty's Government in relation to the institution and subsequent withdrawal of criminal proceedings against the editor of the 'Workers' Weekly' is deserving of the censure of this House," was the wording of Sir Robert Horne's motion.

Neither were actually motions of no confidence but MacDonald treated them as such and dissolved his government.

Three weeks later Baldwin won a resounding victory at another General Election, winning an extra 154 seats, mainly at the expense of the Liberals.

In the 19th century there were two main parties in the UK Parliament — the Conservatives (Tories) and the Liberals (previously known as the Whigs).

Benjamin Disraeli was the leading Conservative of the era and his arch-rival was the Liberals' William Gladstone.

Disraeli died in 1881 and in 1894 Gladstone, by now aged 84, finally handed over the baton of leading the Liberal Party to Archibald Primrose, better known as the 5th Earl of Rosebery.

But Rosebery was a disaster and in 1895 his government began to totter under the weight of criticism both externally and internally — with constant sniping from his Cabinet rival Sir William Harcourt and his son Lewis.

The disputes weighed down Rosebery who suffered from insomnia and bouts of depression.

On June 21, 1895 things finally came to a head with the so-called Cordite Vote.

Cordite had only just been introduced as a new form of explosive for the British Army, which was in the process of equipping its soldiers all over the Empire with it.

When the Army Estimates were debated the Conservative Opposition decided to test the strength of Rosebery's weak government, which depended largely on support from Irish nationalists.

A motion was put forward suggesting the salary of the Secretary of State for War, Henry Campbell Bannerman — a future prime minister  - be reduced by £100.

It was passed by 132 votes to 125 with seven abstentions and was seen as a vote of no confidence.

The Conservative leader, the Marquess of Salisbury, was called on to form a new government and he promptly called a General Election and gained 97 seats and a clear majority.

The Tories were in power for the next 10 years and Rosebery resigned as Liberal leader in 1896.