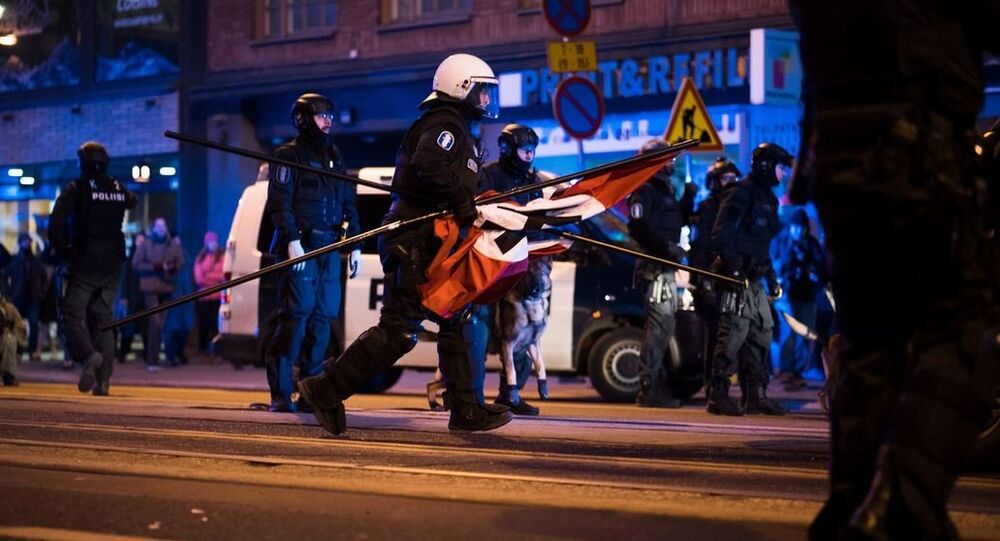 At present, Finland remains one of the few European nations without a comprehensive ban on the swastika, an opportunity neo-Nazi groups are all too happy to exploit. Nevertheless, the country's authorities don't believe a ban-them-all approach would stop Nazism.

Following the public display of swastikas by fringe nationalists that marred last week's Independence Day celebrations in Finland, a hot debate on whether a blanket ban is appropriate erupted in the Nordic country, where it is currently up to the police whether or not to interfere.

During Independence Day celebrations, Helsinki police chose to intervene and seize Nazi flags flying in the crowd. In the ensuing turmoil, four people were arrested.

Following the public outrage, MP Peter Östman from the Christian Democrat party called on the parliament to officially prohibit the swastika in public places, which is currently allowed unlike neighbouring Sweden or Russia.

"Because of its history, the Nazi swastika flag sends a hateful and racist message. It recalls the horrors of World War II and in particular of the Holocaust. Nazi flags do not belong in today's Europe- or Finland", Östman told the Helsinki newspaper Hufvudstadsbladet.

​Thomas Blomqvist, the leader of the Swedish People's Party's parliamentary group said that police did the right thing by seizing the flags he described as a "symbol of evil".

"These flag-bearers either support an ideology that doesn't belong in Western society or anywhere at all or fail to comprehend the historical significance", Blomqvist told Hufvudstadsbladet, voicing his preparedness to back a swastika ban in public places.

At the same time, he expressed doubt whether a change in the law would effectively counter Nazism. Instead, he mused, Nazism can be fought by further improving citizens' knowledge of the Nazis' atrocities in the 1930s and 1940s.

By contrast, Finnish Interior Minister Kai Mykkänen from the National Coalition Party, clearly opposed banning all display of swastikas, stressing that revoking freedom of speech can be problematic.

"It is not necessarily helpful to start regulating signs and symbols. It's more important that the police have a way to intervene if needed", Mykkänen told national broadcaster Yle. "We would have to carefully consider which symbols would then be separated from those protected by the freedom of speech and expression", Mykkänen added.

Mykkänen was supported by former President Tarja Halonen, who served as Finnish leader between 2000 and 2012.

"In my view, Interior Minister Kai Mykkänen put it well when he said that it would be problematic to prohibit certain symbols. On the other hand, we would be more in line with mainstream Europe if we adopted a stricter position on this", Halonen told Yle.

The police later established that the swastika-waving participants in the neo-Nazi-backed march intended it as a provocation, which could have posed a greater risk to public safety. At present, an investigation is going on about whether the flags constituted agitation against an ethnic group.

The swastika was a common decoration motif in Finnish culture even in the pre-Nazi era, but gained particular popularity during the interwar era. Despite the fact that its public use has been greatly limited since the Axis powers (including co-belligerent Finland) were defeated in WWII, it is still seen on numerous war memorials, the flag of the Finnish Air Force Academy and, perhaps most notably, on the official flag of the President of Finland.