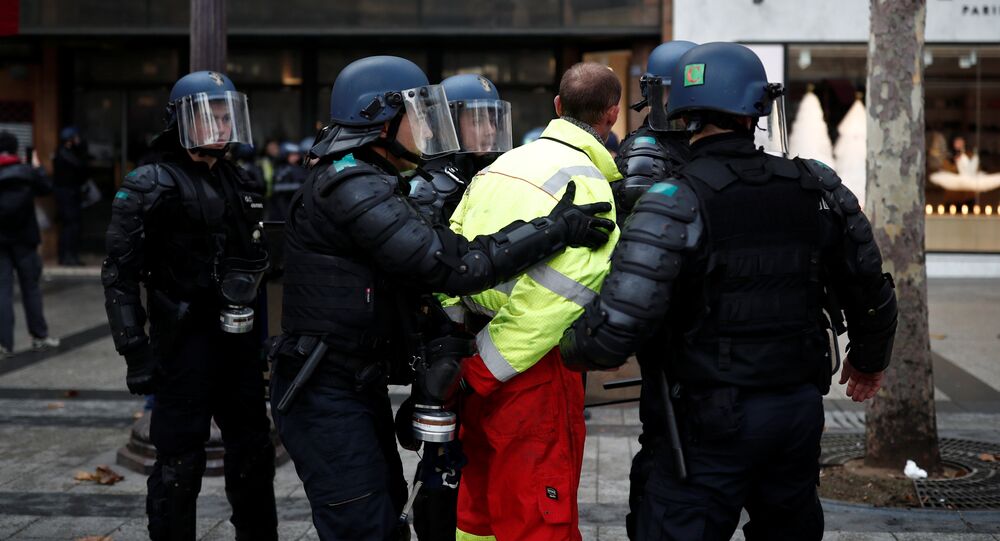 MOSCOW (Sputnik) - French government spokesman Benjamin Griveaux believes that radical forces are attempting to use the "yellow vest" protest movement as an instrument to overthrow the French government.

"Obviously, this is organized. Politicized and radical elements are trying to turn this movement into an instrument. They want to overthrow the government," Griveaux said in an interview with Le Parisien newspaper, asked about whether the protesters had any particular goal staging action near the Elysee Palace.

The spokesman said that French intelligence officers were aware of the possible illegal spread of firearms during protests, and advised "real demonstrators" to refrain from participating in further rallies.

"We know that firearms may be distributed… Real 'yellow vests' cannot serve as human shields. Those present at these protests do not allow the police to detain anyone. Therefore, we call on everyone to be responsible. This is my advice," Griveaux said.

He also urged broadcasters to cover the events in such a way that the positions of law enforcement officers were not disclosed.

© Sputnik
Yellow Vests in Corsica: 'We're in Deep S**t. It's Rude, but It's True'
The so-called yellow vest protests, named after the reflective vests all French drivers are required to keep in their cars, have been ongoing in France since November 17. Saturday's "yellow vest" rally in Paris was accompanied by violent clashes between protesters and police, rioting, burning cars, and destroyed stores and banks. Four people were killed and hundreds were injured during the protests. A new demonstration was called for December 8.

Following these acts of violence and clashes, authorities announced they would close the Eiffel Tower on the day of the upcoming December 8 demonstration over safety reasons. The Louvre, the Delacroix arts museum and the Tuileries Garden will be shut as well.

Addressing the protests, French Interior Minister Christophe Castaner did not rule out on Friday that foreign nationals could participate in the rallies across the country.

"The staff of the Arc de Triomphe said they had seen one German and one Portuguese damaging the Arc de Triomphe. Therefore this cannot be ruled out," Castaner told a press conference when asked whether the authorities feared for rioters coming from abroad.

© REUTERS / Stephane Mahe
Paris Landmarks Will Be Closed Saturday Amid Fears of Violent Yellow Vests Rally
According to the minister, several thousands of people are expected to participate in Saturday's demonstrations, including groups that could get "extremely aggressive."

Major tourist attractions and museums in central Paris, including Eiffel Tower and Louvre, have said they will not open on Saturday amid fears that planned protests could turn violent.

The fuel prices hike is not the only reason for protestors to hold rallies in the country.

In the meantime, French Education Minister Jean-Michel Blanquer promised on Friday to evaluate the possible consequences of the "shocking" arrests of high school students in the Mantes-la-Jolie commune, yet stressed the need to not forget the context and circumstances that had led to such developments.

"When I saw these images, obviously I was shocked like all other people who had reacted to the recording. I am not saying that this is good. This is bad and, of course, we will evaluate the possible consequences," Blanquer told the France Inter radio station.

At the same time, the minister said it was important "not to forget the context" in which these arrests took place, stressing that young people had been staging riots outside the school and attacking police "for several days."

"Over the past several days, young people over the age of 20… had been blocking [the entrance to] the lyceum and even managed to mobilize some students… They stole gas cylinders, were engaged in extortion and attacked law enforcement officers," Blanquer stressed.

French students have been angered by the government's plans to change the baccalaureate, which is the final exam required to get accepted into a university.

© AP Photo / Jacques Brinon
Students Protesting Reform Block Entrances to Some 100 Schools in France (VIDEO)
On Thursday, young people in Mantes-la-Jolie, located in the Yvelines department, took to the streets protesting the government's proposed education reforms. A protest outside Antoine de Saint-Exupery Lyceum ended in clashes with police, with more than 140 people having been arrested. A videotape from the scene showed scores of young people kneeling in front of police with their hands behind their heads.
...
Reddit
Google+
Blogger
Pinterest
StumbleUpon
Telegram
WhatsApp
100