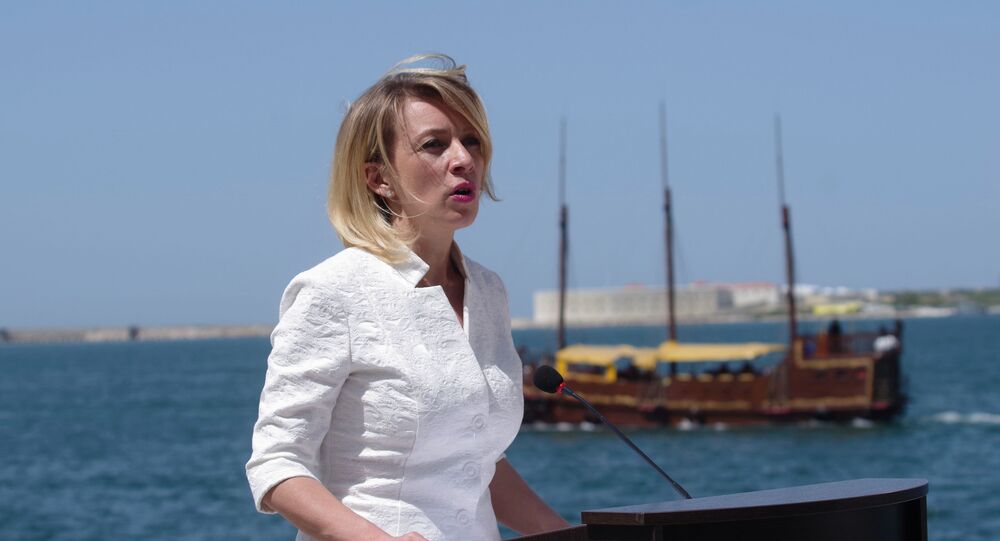 Earlier in the day, the press service of the Russian FSB's Crimean border department detailed that three Ukrainian Navy ships crossed into a temporarily off-limits section of Russian territorial waters, moving from the Black Sea to the Kerch Strait.

Russian Foreign Ministry spokeswoman Maria Zakharova commented on the situation in the Kerch Strait, saying that Ukraine resorted to "bandit methods" toward Russia.

"After tearing Ukraine apart, [Ukrainian President Petro] Poroshenko and the entire Maidan gang will then travel around the world giving lectures on the benefits of democracy, just like [former Georgian President Mikhail] Saakashvili does now. [They] have already reached peace in Donbass. Now they are onto Kerch Strait," she posted sarcastically to her Facebook page.

"[They are] highwaymen. And they use bandits' methods, too: first, a provocation; then, exertion of force; and finally, accusing others of aggression," she added.

According to earlier reports in some Western media outlets, the Ukrainian Navy claimed that one of its vessels lost power as Russian ships allegedly attacked a Ukrainian armored artillery vessel.

The Russian naval ships "opened fire on a group of ships of Ukraine's navy," the Ukrainian Navy Facebook page declared.

© Sputnik / Georgy Zimarev
UK Foreign Office Calls on Russia to Grant Intl Ships Access to Azov Sea
A crisis in the maritime region of the Sea of Azov erupted this year after Ukraine detained a Russian vessel, prompting Moscow to boost controls in the area. Tensions further escalated in October when the Ukrainian parliament passed a draft law authorizing Kiev to expand maritime controls over an additional 12 nautical miles off its southern coast, purportedly in an effort to counter smuggling in the Black Sea.

The Russian Foreign Ministry warned Ukraine against attempts to revise the status of the Sea of Azov — in violation of international law — and urged Kiev to refrain from attempting to unilaterally establish new state borders.