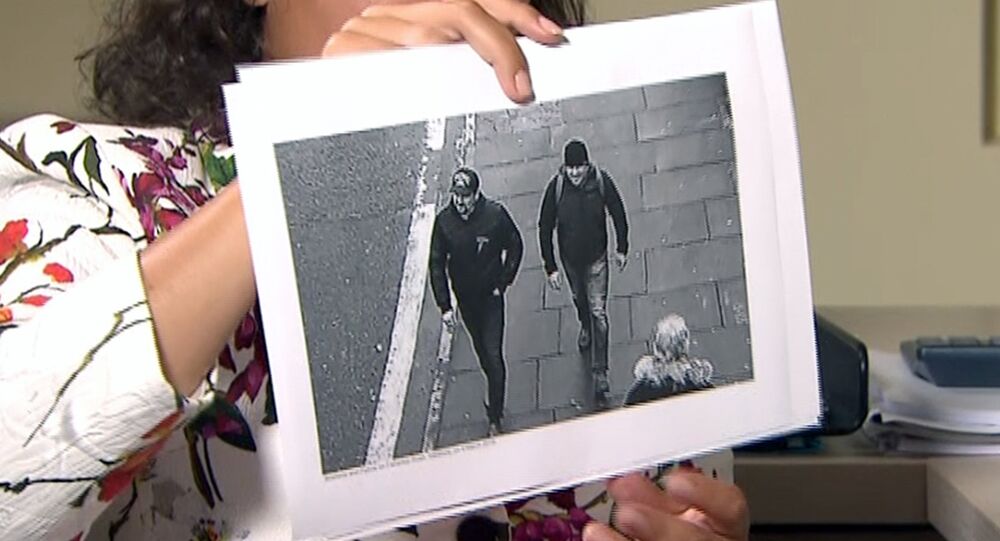 Russian presidential spokesman Dmitry Peskov has commented on the latest footage released by London Metropolitan Police on the Salisbury and Amesbury incidents, saying that while the use of the nerve agent in Europe was cause for concern, British investigators have yet to share any information with the Russian side.

© AP Photo / Andrew Matthews/PA
‘We Lost Everything’: Skripal Case Police Officer in First Interview
Earlier Friday, the London Metropolitian Police released fresh CCTV footage showing the two Russian nationals it suspects of involvement in the poisoning of Russian ex-spy Sergei Skripal and his daughter Yulia, showing them walking around the southern English town of Salisbury on March 4. The footage does not show the men at Skripal's home, however, where police allege they sprayed a military-grade poison on the door handle.

Police also released images of what they said was a "specially made model of the counterfeit perfume bottle" in which they believe the toxic substance used to poison the Skripals was kept. Police said they are now investigating how the bottle got from Salisbury, where it was allegedly used to poison the Skripals, to Amesbury, when it was found by Charlie Rowley, one of the victims of the Amesbury poisoning incident which occurred in late June.

© AP Photo / Metropolitan Police
UK Police Release New Footage Depicting Salisbury Skripal Poisoning Suspects
Sergei and Yulia Skripal were found unconscious on a bench at a Salisbury shopping center on March 4. London quickly concluded that they were poisoned by a Russian military-grade nerve agent, and accused Moscow of staging the attack, leading to a diplomatic row between the two countries which culminated in sanctions and the expulsions of dozens of diplomats. In September, UK investigators identified two Russian nationals named Alexander Petrov and Ruslan Boshirov, saying the names were possible aliases. Investigators accused the pair of working for Russian military intelligence and carrying out the poisoning attack. The men came forward for an interview with RT's Margarita Simonyan on September 13, telling her that they were sport nutritionists who traveled to Salisbury as tourists, and that they had no ties to Russian military intelligence.

Russia has sent several dozen diplomatic notes to the UK calling for cooperation in the investigation of the case. London left these proposals unanswered, and accused the Russian side of refusing to cooperate.