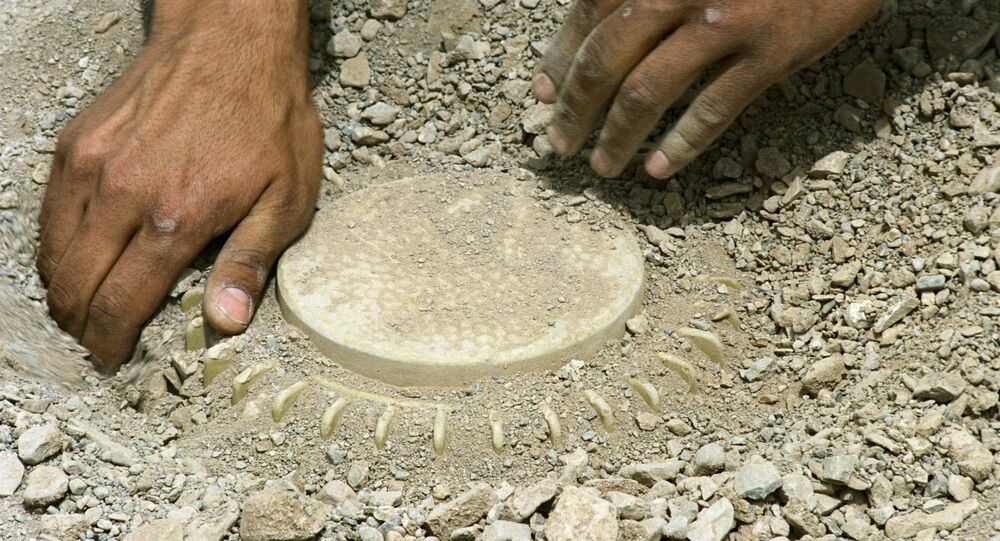 ATHENS (Sputnik) - Bulgaria has returned 190,500 anti-personnel mines to Greece due to an incident at a plant where they should have been destroyed, the Bulgarian Foreign Ministry said in a statement on Wednesday.

"Following the tragic incident the plant was closed, while its license was revoked. This forced [Bulgaria] to return the anti-personnel mines to their owner — the Hellenic Armed Forces," the statement said.

© AP Photo / Evgeniy Maloletka
UNICEF: Landmines Put Thousands of Children at Risk in Eastern Ukraine
According to the statement, there have been problems with the return because there were no authorized facilities in Greece holding licenses for landmine destruction.

In 2007, Bulgaria's Videx AD company won an international bid to destroy anti-personnel mines. Mines from former Yugoslavia, Albania and Greece have been transported to Bulgaria. The mines used to be destroyed at the former Midzhur Ammo Plant, however, as a result of an explosion that occurred at the plant on October 1, 2014, the facility was completely destroyed.

Greece was due to destroy all its anti-personnel mines (1.5 million mines) by March 31, 2008. However, Athens have not complied with the deadline. As of March 2018, 650,000 mines, including nearly 200,000 mines stored in Bulgaria, were still subject to destruction, according to the Greek Foreign Ministry.

WATCH "Israeli-Made" Landmines, Other Weaponry Handed Over by Syrian Militants