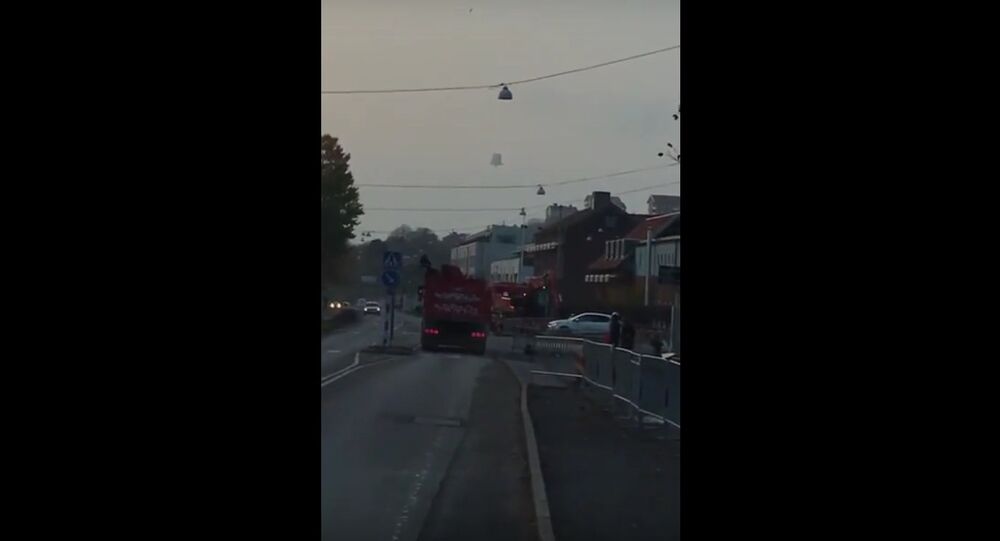 A bizarre video clip has surfaced on YouTube, showing what some people believe could be from outer space, or perhaps inspired by alien technology.

The footage, initially shared by user Amirreza Milad, was purportedly shot in Gothenburg, Sweden. It shows a blurred bell-shaped object hovering above the city, which morphs into something resembling a rectangle as the clip goes on. According to Amirreza, the object was "huge like a building."

The video was picked up by secureteam10, a popular YouTube channel specializing in UFO sightings, and has hit over 130,000 likes in just one day. These online truth-seekers suggested that the anomaly could be an example of reverse-engineered alien technology that the Nazis invented when studying alien spacecraft.

"Many people hold today that Germany was the very first nation to actually get a hold of some sort of back- or reverse-engineered alien technology and actually harness anti-gravity technology, which then throughout and after the 1940s proliferated in bell-shaped UFO sightings."

A popular conspiracy theory claims that Adolf Hitler was obsessed with occult weapons. Although he indeed sent a scientific expedition to Tibet prior to the outbreak of WW2, mainstream historians believe that its goals had to do with natural sciences and geopolitics.

However, esoteric mystery is enticing. Some journalists and researchers believe that the Nazis were working on a secret wonder weapon — "Wunderwaffe." Polish author Igor Witkowski speculated that Third Reich scientists did invent a top-secret device, using their advances in antigravity and free energy research. According to Witkowski, this weapon was called Die Glocke ('The Bell') and measured 2.7 metres in width and 3.7 to 4.6 metres in height.

Although no evidence has ever surfaced that such a device did exist, this theory was picked up and popularized by military journalist Nick Cook.

Some people appear to believe that Hitler's Tibet expedition produced some interesting results, as they link the mysterious object caught on camera in Gothenburg with Vimana, a mythological flying palace described in Indian religious texts.

"Swedish ‘building' looks like the description of an ancient 'Vimana,'" said a user going by nickname Stu.

"Looks like one of those Indian ancient flying machines. The Vimana﻿," another user wrote.

A user who identifies as StoneOcean claims to have witnessed the sighting. "I live in Gothenburg and saw this object clearly. Seamed out of place but it moved with the wind so no strange patterns. It slowly transformed like it was made of paper. Could not see any textures. Did look very much as a big bell.﻿"

"New aliens visiting earth the first time, who didn't get the memo that you're only supposed to hover over cities at night or use cloaking tech," Sunglare joked.