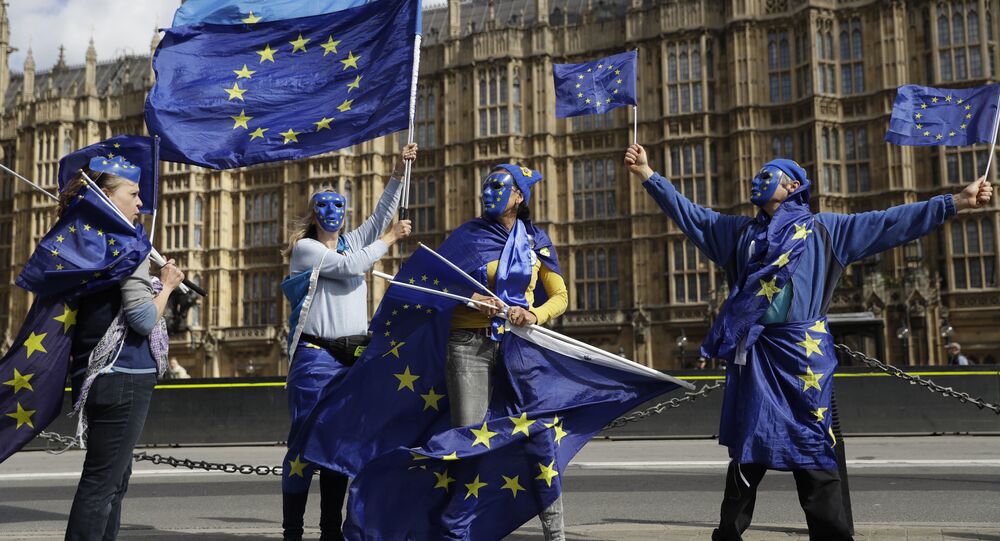 MOSCOW (Sputnik) – Over 50 percent of UK nationals would uphold the United Kingdom remaining in the European Union in case of the second Brexit referendum amid increasing possibility of the vote, the data of the UK National Centre for Social Research (NatCen) showed on Friday.

"At present 52% of Brits currently want to remain in the European Union, with 48% backing Leave," the research agency said in a statement.

John Curtice, the senior research fellow at NatGen, noted that despite the increasing likelihood of the second Brexit referendum, it was still unclear if those willing to remain in the European Union would gain the majority in the vote.

"True, Remain enjoys a lead in the polls. But that lead remains a narrow one, and there is little sign of it growing. Moreover, it rests quite heavily on the preferences of those who did not vote two years ago, and who by two to one now say they would back Remain," Curtice added.

© AP Photo / ALLEN SULLIVAN
Brexit May Help UK Escape EU Law Limiting Antibiotics Use for Animals - Reports
The NatGen’s data is based on the recent polls of the Brexit voting intentions, conducted by other pollsters between August 21 and September 10.

The possibility of the second Brexit referendum has repeatedly been voiced by the UK opposition Labour Party, which has been one of the critics of Prime Minister Theresa May’s withdrawal plan. In the recent case on Tuesday, the Labour said it would raise the issue of the second vote in the parliament if the lawmakers fail to adopt the Brexit agreement which is expected to be reached by the United Kingdom and the European Union.

In 2016, 51.89 percent of UK nationals supported leaving the bloc, while 48.11 percent voted to remain in the European Union.