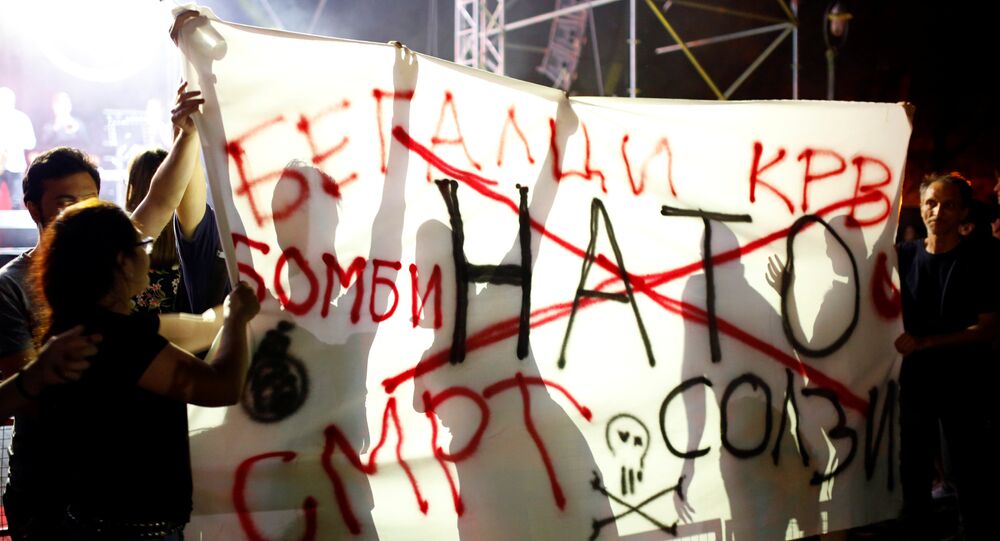 Macedonians will go to the polls next month to determine whether or not to change their country's name to the "Republic of North Macedonia" in accordance with a long-standing Greek demand; the name change is expected to remove the main roadblock to Skopje's prospective membership to the European Union and NATO.

A recent poll by the Macedonian Center for International Cooperation (MCIC) found that a plurality of Macedonians seem to be in favor of joining the Western economic and security blocs in exchange for the name change.

A total of 66.4 percent of respondents said they were going to take part in the vote, with 19.8 percent saying would boycott and 11.9 percent yet make up their minds.

Skopje-based political observer Aleksandar Mitevski says these survey results should be taken with a grain of salt, given that the MCIS is affiliated with Prime Minister Zoran Zaev and his ruling Social Democratic Union of Macedonia, which has pushed for the country's entry into Western institutions in exchange for the name change.

"Our government recently commissioned another public opinion survey which found that almost 70 percent of Macedonians opposed the idea of joining both EU and NATO if it came at the cost of changing the name of the state, and voiced their intention to boycott the referendum," Mitevski told Sputnik Serbia.

According to the political scientist, in Bitola, Macedonia's second largest city, just 22 percent of respondents said that they planned to vote in the referendum, with ex-foreign minister and opposition VMRO-DPME politician Antonio Milososki's Facebook post on the subject sparking media attention and debate.

"[The government] hid the results of that research for a month, and I can only interpret the [MCIC] poll as a statement about an intention to manipulate the results of the referendum," Mitevski warned.

© AP Photo / Boris Grdanoski
Macedonian Activists Launch Campaign to Boycott Name-Change Referendum – Reports
The political observer also pointed to other recent polls, which showed an expected turnout ranging from 28-33 percent, with this data running at odds with the MCIC's figures and the required 70 percent turnout required for the referendum's results to receive official recognition.

Late last month, Macedonian web portal MKD published the results of its own poll, conducted by the Market Vision public opinion research firm, finding that 47.9 percent of respondents favored renaming the country to join Western institutions, with 52.1 percent marking their opposition. Furthermore, by ethnicity, the poll found that 71.7 percent of ethnic Macedonians were opposed, with 94.7 percent of ethnic Albanians in favor. Ethnic Albanians are thought to make up some 25 percent of Macedonia's population according to the latest census from 2002.

Another poll, organized by the United Macedonian Diaspora organization, found that some 90 percent of respondents were opposed to the name change.

According to Mitevski, just 14-15 percent of Macedonian Albanians and no more than 20 percent of ethnic Macedonians actually favor changing the country's name. "In Macedonia, apart from the parties of the ruling coalition, including the Social Democratic Union and the Democratic Union for Integration [the largest party representing the Albanian minority], there are no other political forces who support this referendum. Those two parties will not be able to ensure the 70 percent turnout necessary for the referendum to be recognized," the analyst insisted. "This," he said, "will be possible only if they falsify the results in the same way as they falsified the results of this MCIC poll."

© AP Photo / Boris Grdanoski
Macedonian PM Vows to Respect People’s Choice at Name-Change Referendum
For his part, former Macedonian foreign minister Denko Maleski said that he supports the referendum, having told Sputnik Serbia that the vote was a "good chance" to break a "vicious circle along which we have been moving along for 30 years, without finding a compromise with Greece."

"Today, there is a unique international situation, which should be taken advantage of, given the willingness of both governments, to escape the bonds of nationalism. For this reason, boycotting the referendum is not a good idea," Maleski argued.

Macedonians will go to the polls on September 30. Macedonia and Greece have been engaged in a dispute regarding the Balkan country's name since it declared independence from Yugoslavia in 1991, with Athens claiming the existing name implies territorial claims against Greek Macedonia, and vowing to block Macedonia's access into the EU and NATO until it changes its name.

In June, Athens announced that an agreement had been reached with Skopje to rename the country from the "Republic of Macedonia" to the "Republic of North Macedonia." The agreement also involves the removal of references to the "Macedonian people" in Macedonia's Constitution, and the removal of the Vergina Sun, which appeared on the country's flag before 1995, from state symbols.

Macedonia's Parliament ratified the agreement last month, with the ruling coalition government announcing a referendum. The VMRO-DPMNE, Macedonia's chief opposition party, has threatened to boycott the referendum, and considers the government's deal with Athens "treasonous."