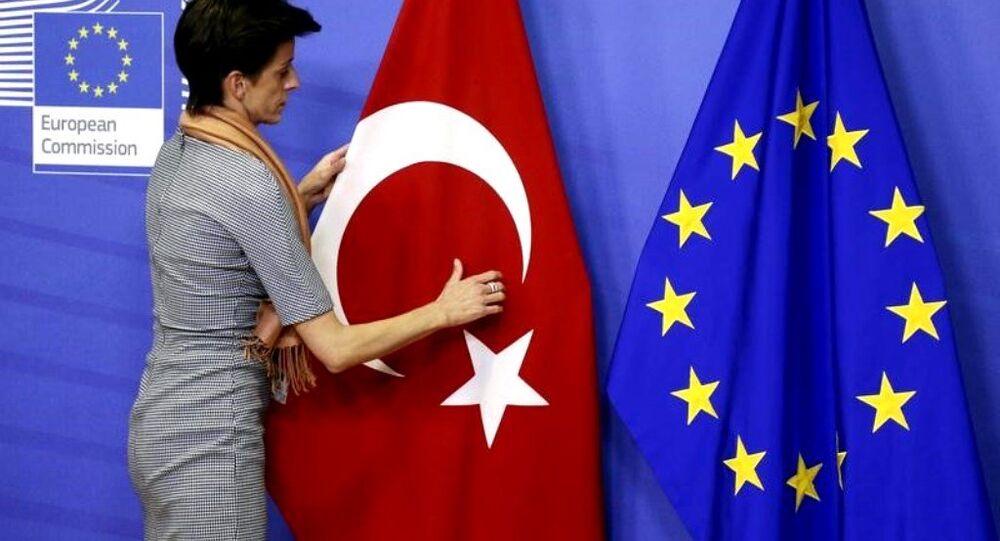 ANKARA (Sputnik) – Turkey hopes that the process for the country’s accession to the European Union will resume and pledges to continue with the reforms needed to attain membership, Turkish Foreign Minister Mevlut Cavusoglu said on Monday.

The minister added that Turkey had never abandoned its aim to join the bloc.

"We will continue pushing together for the reforms domestically in our ministries and state agencies… Also when it comes to visa liberalization and the customs union, we are expecting them [those ministries and agencies] to take a step to break up the cycle of doing nothing," Cavusoglu stressed.

The annual Ambassadors Conference began on Sunday and will last through August 17 both in Ankara and Konya.

© REUTERS / Francois Lenoir
EU Positively Assesses Turkey’s Visa Liberalization Roadmap at Talks in Ankara – Source
The European Union and Turkey started accession negotiations in 2005. However, bilateral relations deteriorated in the wake of the failed coup in Turkey in July 2016, with Ankara accusing Europe of providing asylum for coup plotters. Meanwhile, Brussels has strongly criticized the detention of journalists and human rights activists in Turkey, and suspended preparations for new chapters of Turkey's accession negotiations.

Ties further deteriorated after several European countries, including Austria, refused to allow Turkish political figures to hold rallies for diasporas abroad ahead of the country's constitutional referendum, which was held in April 2017.